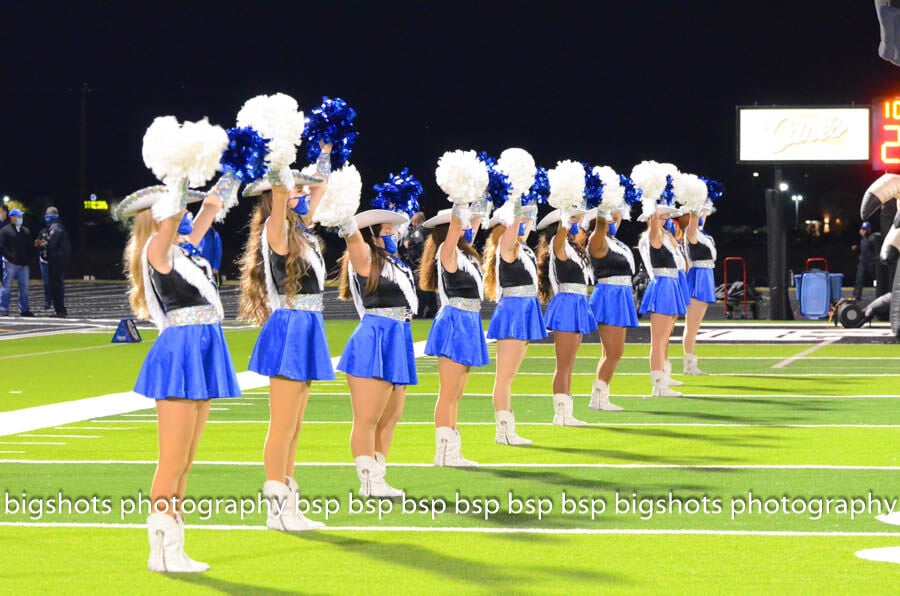 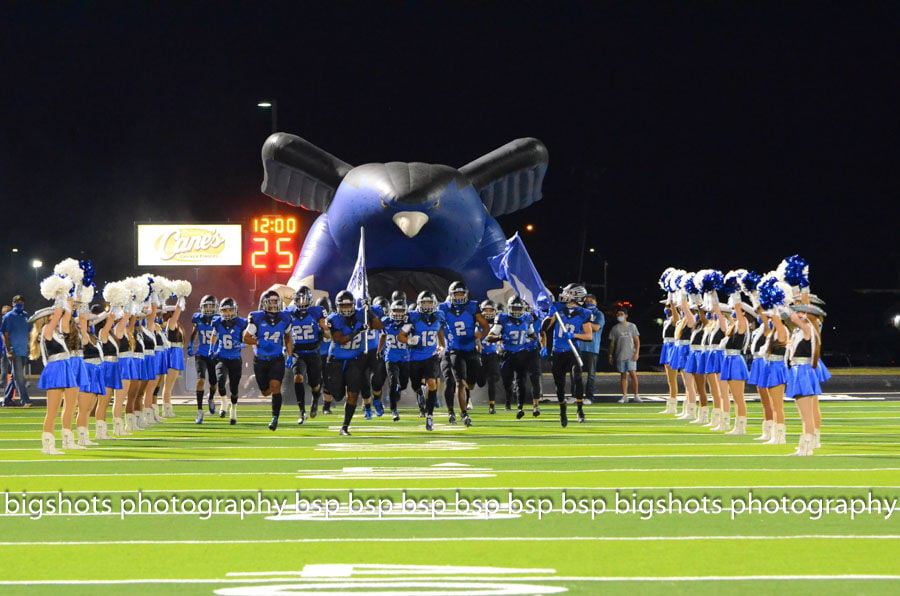 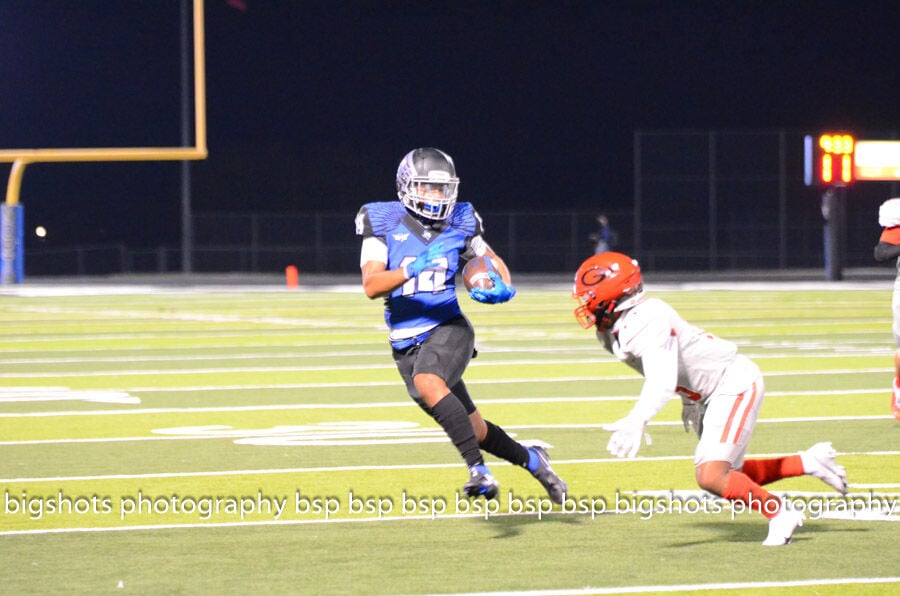 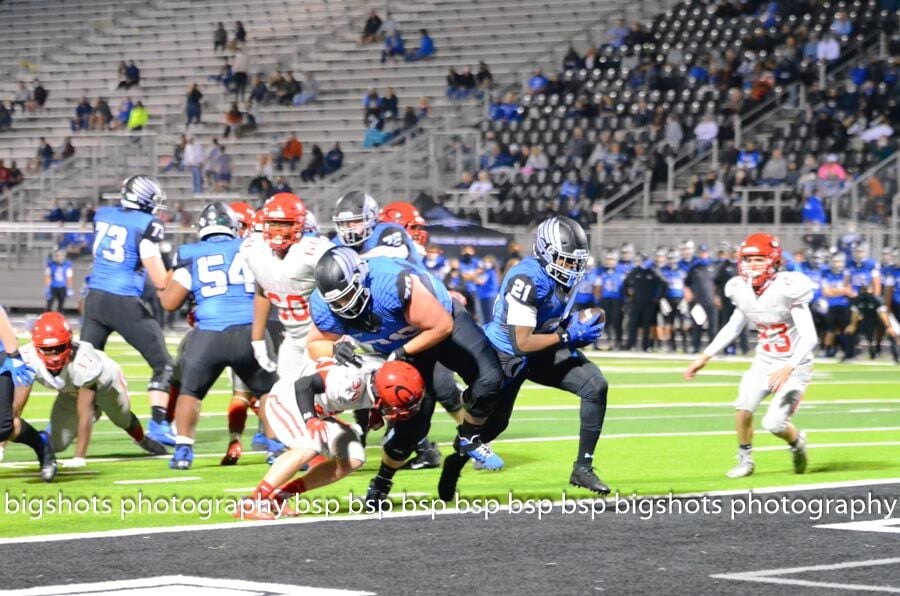 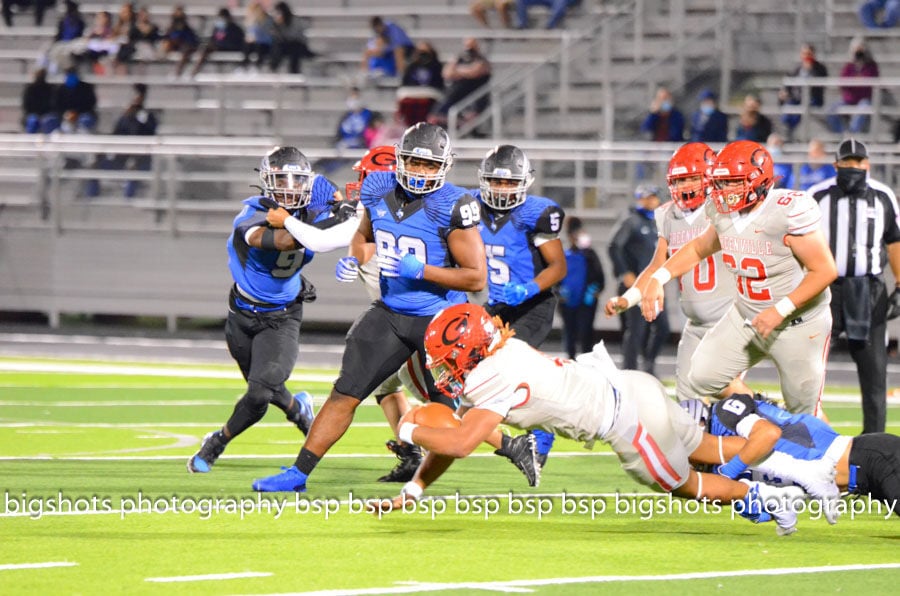 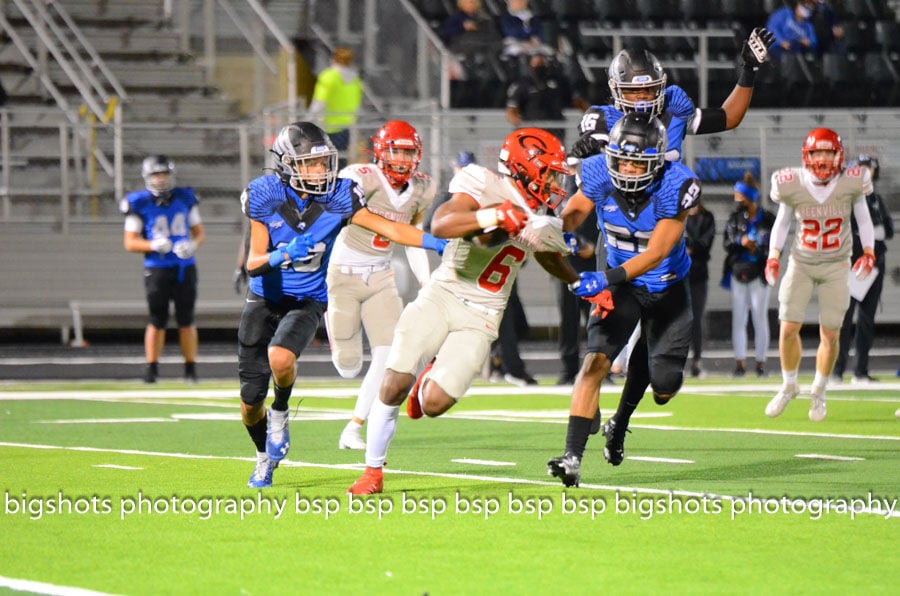 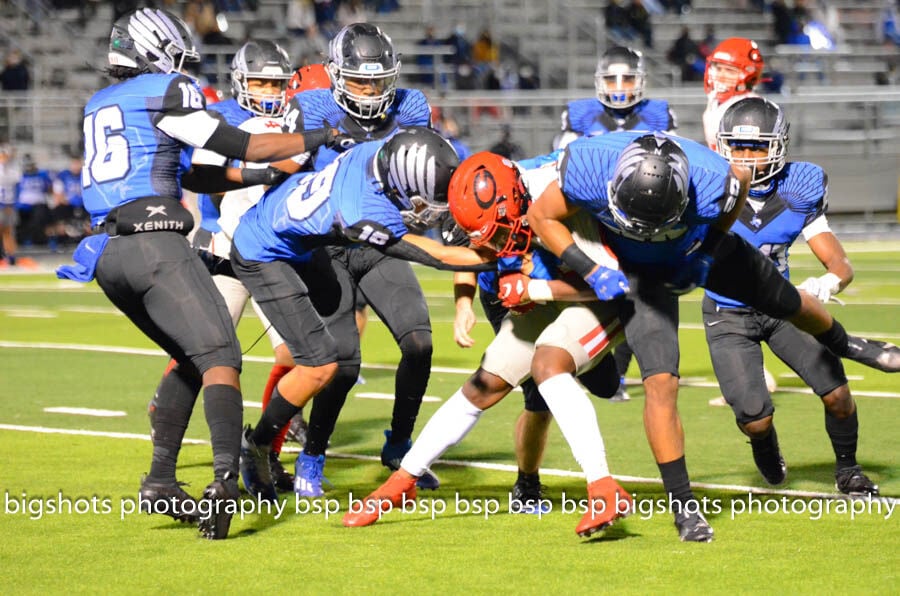 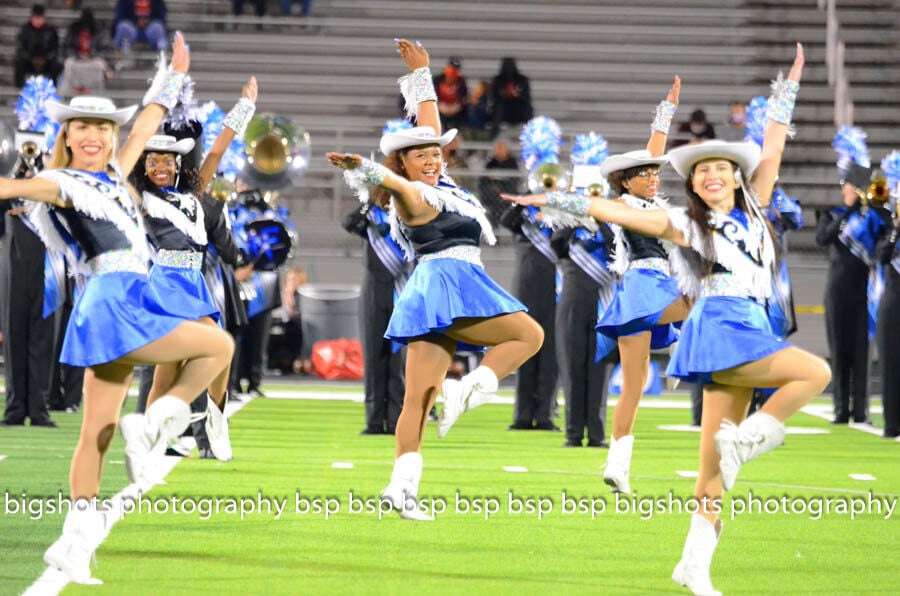 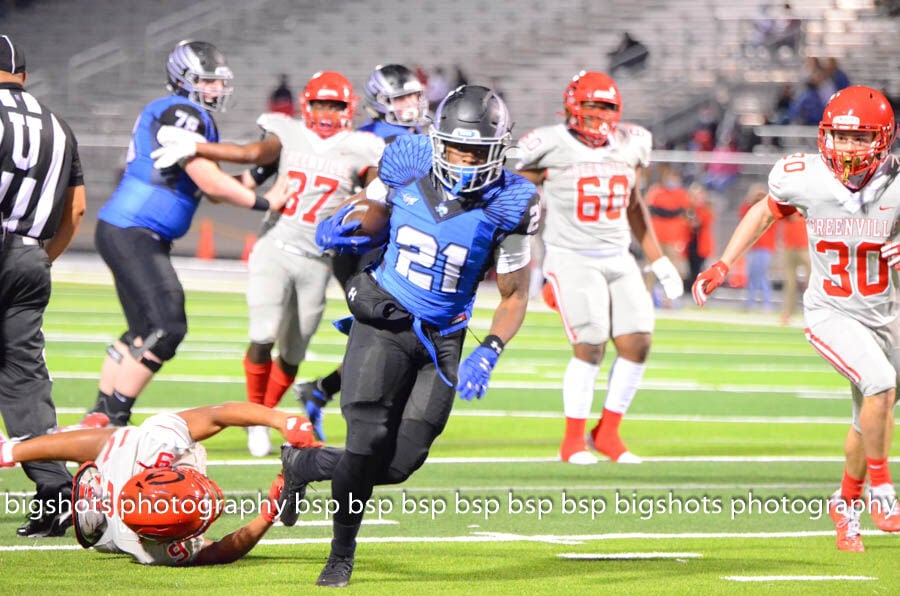 FORNEY, Texas — A famous person once said, "You can’t change the past”. Yeah, I know, literally every person has said that more than a time or two in their lifetime, but it still rings true.

On Friday night North Forney couldn’t do anything to change the haunting result of that infamous 2019 upset loss at the hands of Greenville that would end up keeping the Falcons watching from home during last season’s playoffs.

However, they did do something about this season’s playoffs by punching their ticket to the post season with a 57-25 thrashing of the Lions. In the process they also clinched the top spot in district 8-5A Zone B putting them on a collision course with Ennis, who’s ranked #1 in the state, for a winner take all district championship game in two weeks.

In last year’s 38-49 defeat to Greenville, the Falcons had no answer defensively for the Lions offensive attack allowing 581 yards of total offense including 386 yards rushing.

Friday night, North Forney’s revamped defense would be the star of the show holding Greenville to only 298 total yards and 118 rushing yards. The Falcons defense came out on a mission not allowing the Lions to gain a first down until late in the first quarter. Greenville senior quarterback Brandon Stephens, who torched North Forney last year to the tune of 293 yards of offense and three touchdowns, faced constant pressure all night long. Stephens was held to 206 yards of offense and 2 touchdowns.

The Falcons scored first taking advantage of a short field when Stephens muffed a punt return that was recovered by Falcons junior linebacker Tre Jones at the Greenville 36-yard line. A trick pass that saw junior wide receiver Lemarcus Kirk pitch the ball back to fellow senior wide receiver Collyn Shipley on the reverse and then catch the pass from Shipley set North Forney up inside the 10-yard line. A few plays later senior running back Ty Collins ran in the touchdown from 3 yards out and the Falcons also converted the 2-point conversion.

Collins made the crowd go bananas on the next North Forney offensive possession when he trucked over a defender in route to a 24-yard run that setup his 1-yard touchdown run on the very next play putting the Falcons up 15-0 after the extra point from senior kicker Ricky Cortez.

A 10-yard touchdown pass from Stephens to senior wide receiver Miles Denson gave Greenville their first points of the night on the first play of the second quarter.

However, on the ensuing kickoff North Forney senior running back Jermaine Oakley took the reverse return all the way down to the 1-yard line before getting knocked out of bounds. Two plays later Collins powered through the line for the touchdown and the 23-6 lead after another converted 2-point conversion.

The defense forced a three and out on the next series. A bad Lions punt gave the ball to the Falcons with great field position at the Greenville 32-yard line and North Forney would eventually score a few plays later when senior quarterback Jacob Acuna found senior wide receiver Kam Allen for a touchdown on the 8-yard jump ball pass into the endzone bumping the Falcons lead to 30-6.

On the next Greenville possession North Forney’s defense smartly took advantage of a fumble that was ruled to be a lateral pass when senior cornerback Xavier Elder picked up the loose ball while everyone else watched in disbelief and returned it 43 yards for the Falcons score giving them a 37-6 second quarter lead.

The next Greenville possession ended after a failed 4th down conversion in Falcons territory when Stephens was sacked in the backfield by sophomore defensive lineman Nick Acuna and senior linebacker Chandler McGee.

Perhaps the most spectacular play of the night came a couple of plays later when Acuna found Allen for his second touchdown grab of the night via a 40-yard touchdown pass down the sideline. Allen, who had a defender holding down one of his arms used the other one to pull the pass out of air one handed at the 10-yard line before running it the rest of the way in for the touchdown.

Through a quarter and a half, the Falcons led 44-6, quickly erasing any doubt there would be a repeat of 2019.

Greenville got their second touchdown of the night when Stephens found senior wide receiver Shawn Brown for a 32-yard touchdown that cut the North Forney lead to 44-12 going into halftime.

In the third quarter the Falcons added to their lead after Collins rumbled in from 12 yards out for his fourth rushing touchdown on the night and twelfth on the season.

Later in the third quarter, junior quarterback Landon Heath, pulled off his best Patrick Mahomes impression when he scrambled around in the backfield and then found Shipley in the back of the endzone for a touchdown and a 57-12 lead after the Cortez extra point. It is worth noting that Shipley used both hands to bring in this touchdown pass after trying to outdo Kam Allen with his own incredible one-handed catch along the sideline earlier in the game.

The Lions would tack on a pair of late touchdowns runs from junior running back Ottagus Johnson to make the final score 57-25.

North Forney moves to 6-0, (2-0 in district) and will play Corsicana next week at Tiger stadium in Corsicana, TX.