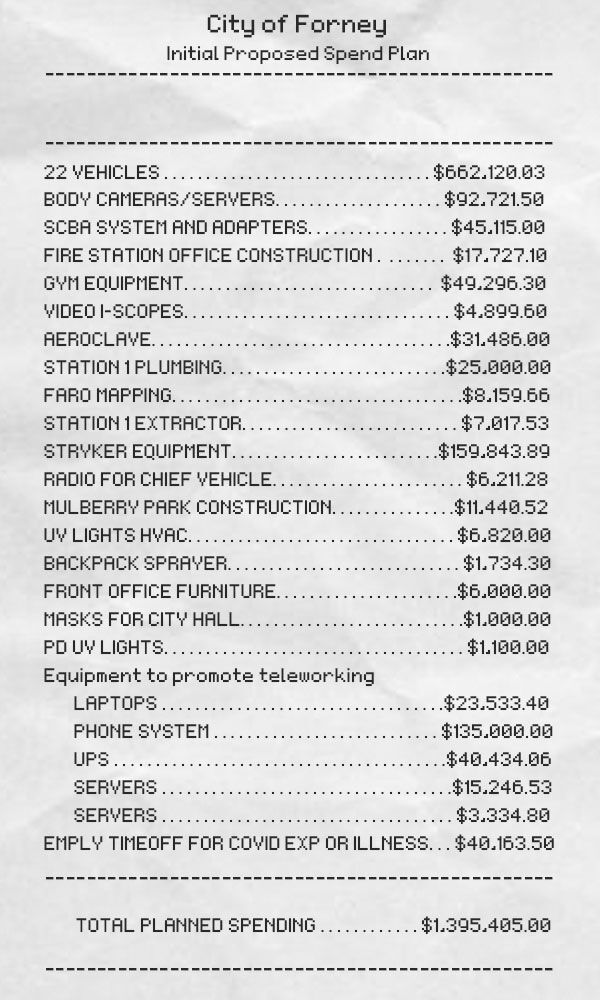 FORNEY, Texas — Recently obtained records show the City of Forney purchased 22 vehicles and other proposed expenses totaling $1.4 million in an initial Spend Plan prior to review or approval from the state or its third-party auditing company.

In the weeks following our investigative report uncovering the City of Forney's use of Coronavirus Relief Funds, the state agency who oversees Coronavirus Relief Funds (CRF) spending has confirmed no CRF will be used by the City of Forney to purchase or reimburse the cost of 22 vehicles or approximately $740,000 in other proposed expenses which may have also been deemed ineligible and later removed from the city's initial Spend Plan.

The confirmation from the state comes after city officials published a video maintaining CRF funds were, in fact, used to purchase the 22 vehicles and, internally, described the other proposed expenses to employees and vendors as CARES Act expenditures and indicated as such in their accounting.

Newly obtained documentation and emails from an inForney.com open records request with the Texas Division of Emergency Management (TDEM) also indicates the agency's third-party auditing company had concerns about the City of Forney's expenses. The City of Forney, however, had already expended funds on the 22 vehicles and other proposed expenditures, prior to review or approval, in hopes of later receiving complete reimbursement as eligible expenses under the CARES Act.

As previously reported by inForney.com, the City of Forney purchased 22 vehicles for a total expense of $662,120.03 in October and early November. Those purchases were indicated in the city's accounting as being funded through the CARES Act, were a significant increase over the city's prior spending on vehicles — an average of 3.82 vehicle purchased per year over the past 11 years — and substantially increased the city's non-emergency vehicle fleet by 57%.

FORNEY, Texas — The City of Forney's use of Coronavirus Relief Funds (CRF) to replace certai…

In response to that report, two days later, on December 8, 2020, Forney City Manager Anthony "Tony" Carson confirmed in a video produced by the City of Forney and posted to its Facebook Page that approximately 40% of the City of Forney's CRF allocation was spent on vehicles as a means of social distancing employees — claiming the expenditures were cleared through TDEM.

"What are the processes of utilizing these funds as far as clearing the Texas Department of Emergency management, how does that work?" City of Forney Social Media Marketing Specialist Zach Smith was seen asking Carson in a portion of that video.

"You are correct, here in Texas, because we are a smaller municipality, those funds are transferred to TDEM and they administer them on the local level," responded Carson. "So, any of our expenditures that we were going to be submitting for approval, we would send in through TDEM for their review."

"So, obviously a lot of the funds were utilized to purchase vehicles for the city," asked Smith. "What was the reasoning for utilizing those funds that way?"

"Yea, about 40% of the funds were utilized for vehicles,"Carson stated. "One of the reasons are, the big part of the CARES Act, we want to mitigate our exposure to our employees."

"And, that's very important," continued Carson. "Be it protective gear, sanitizers, equipment to disinfect buildings but, for us, there was a lot of times we had three and four people in a closed vehicle going from work site to work site, and so, whatever we could do to minimize the amount of people in an enclosed space, that's what we did. So we were purchasing the vehicles to minimize that getting three and four people getting into a vehicle to go out to work."

Carson's response came nearly a month after TDEM had notified the City of Forney of its ineligible expenses and the vehicles were subsequently removed from the city's Spend Plan with the agency. Records also indicate the vehicles were purchased prior to review by TDEM and its auditors.

Initial Spend Plan identified $1.4 million in proposed expenses, all of which were later removed from final plan submittal

The 22 vehicles purchased by the City of Forney weren't the only expenditures on the city's initial Spend Plan submitted to TDEM, which were later removed prior to final submittal.

According to email communication between the City of Forney and TDEM, the City of Forney submitted its initial proposed Spend Plan to the agency on or about November 10, 2020. That Spend Plan included the $662,120.03 in vehicle expenses and $733,284.97 in other proposed expenses — totaling $1,395,405, or the city's complete allocation of CRF funds.

After receiving the City of Forney's initial proposed Spend Plan, an auditor with HORNE LLP, which has been contracted by TDEM to review CRF expenditures, emailed TDEM's Regional Unit Chief Andrea Lowe with concerns.

"We received the attached spending plan from the City of Forney earlier today and I want to make sure it’s on your radar," read that email, in part. "At 1st glance, there are several expenses on the plan that I think we should discuss with them because they appear to be ineligible. Would you mind setting up a meeting with them so we can ask some questions and gain clarity on their plan?"

On November 13, 2020, following a meeting between the City of Forney, TDEM, and HORNE LLP, the City of Forney submitted an updated and final Spend Plan which removed all of the previously proposed expenses and now only included a request for the complete CRF allocation of $1,395,405 for public safety payroll for police, jailers, dispatch, and firefighters.

"TDEM, our contractor Horne, and the City of Forney met to discuss the vehicle eligibility, and those items were removed from the spend plan by the city," TDEM's Chief of Media and Communications Seth Christensen told inForney.com in an email response earlier this week.

None of the other items removed from the Spend Plan would be covered by CRF funds through reimbursement or disbursement as they have all been removed from the city's final Spend Plan submitted to the state, TDEM confirmed. While the deadline for expenses under the CRF was December 30, 2020, the city will be able to provide finalized documentation into 2021 for eligible expenses up to the alloted allocation which, in turn, will be reviewed by TDEM and HORNE.

Former council member Mike Thomas, in response to our initial reporting, stated, in part, "...during this process of obtaining the vehicles [city officials] were in contact with the state agency that oversaw the funds. Not only did that agency tell them purchasing the vehicles was allowed, they also told city of Forney officials how to submit the paperwork."

Thomas had recently resigned his position on the Forney City Council in August 2020. Because his resignation came after he filed for a position in the May 2020 election, and that election was postponed until November 2020, Thomas' name appeared on the November ballot and he again formally resigned from the council at that time.

Asked if there was any specific instruction provided by TDEM substantiating this claim, that TDEM instructed the City of Forney to purchase said vehicles in this manner and in which their final Spend Plan and grant request forms were later completed and submitted to TDEM, Christensen says, that while the agency provides assistance through the CRF process, including how to submit documentation, the agency did not give approval to the City of Forney to purchase the vehicles.

"As noted, and as shown in the updated spend plan, the vehicles were removed from CRF consideration," he said.

Purchase records obtained by inForney.com through numerous public information requests indicate the vehicles were purchased in the month and weeks prior to the City of Forney submitting and requesting approval of its initial Spend Plan with TDEM. Guidance issued by the U.S. Department of Treasury and TDEM also did not unilaterally provide approval to local governments to purchase vehicles.

In submitting their updated and final Spend Plan with the state on November 13, 2020, the City of Forney certified and requested reimbursement only for expenses related to public-safety employee payroll — removing all other requests for reimbursements or disbursements for vehicles or other expenses proposed in its initial Spend Plan.

As previously reported, twice in 2020, in May and October, the Forney City Council voted unanimously to approve resolutions granting City Manager Carson the authority to execute all necessary grant applications, accept grant funds from the CRF, and to authorize expenditures of grant funds related to COVID-19. This meant large capital purchases specifically related to the expenditure of CRF funds would not have to go back to the Forney City Council for deliberation or approval.

The resolutions did not, however, provide Carson the authority to expend funds not related to the Coronavirus Relief Fund, funds "made available" due to reimbursements to payroll expenses, or expenses which weren't previously approved by the council in its most recent budget approval.

According to the City of Forney's budget, capital purchases are defined as any equipment or software with a price that exceeds $5,000 and has a useful life of over three years.

"No new capital purchases have been planned for Fiscal Year 2021," states this year's annual budget which was approved by council. "However, a transfer of $600,000 has been made from the General Fund. The possibility of capital purchases will be reevaluated at mid-year."

The budget does not provide spending for any of the purchased vehicles or any of the other items which may have already been purchased under the city's initial Spend Plan with TDEM. The city council is expected to reevaluate, not only the capital purchases for the year in April, but bringing police and firefighters in-line with a previously approved STEP plan.

inForney.com sought comment from Carson Friday afternoon for this article but, as of press time, had not received a response. A request was also made seeking a complete release of documents requested by inForney.com under the Freedom of Information Act requesting the city's to-date reporting, as of November 24th, of CRF expenditures as Carson's comments contradict the records which were ultimately released by the city in response to that request.