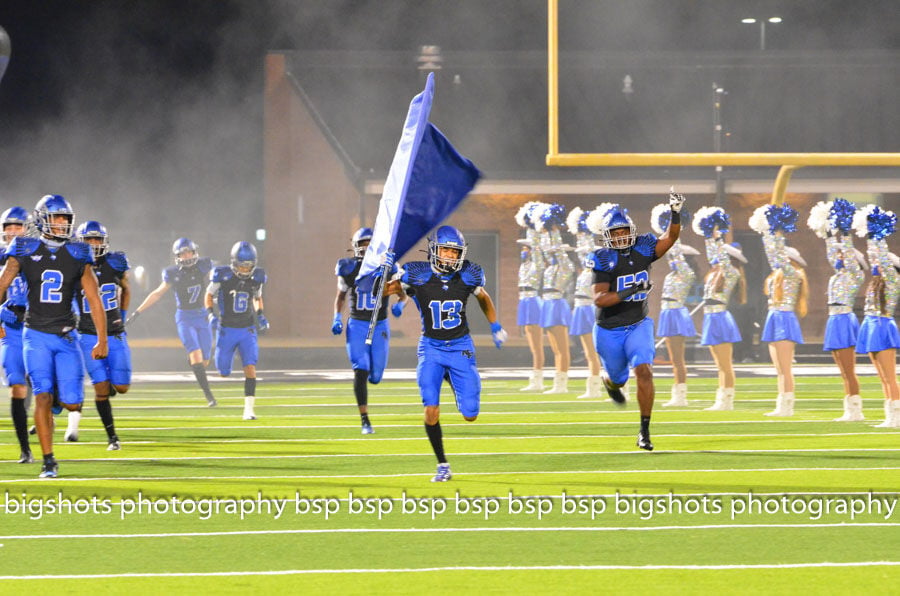 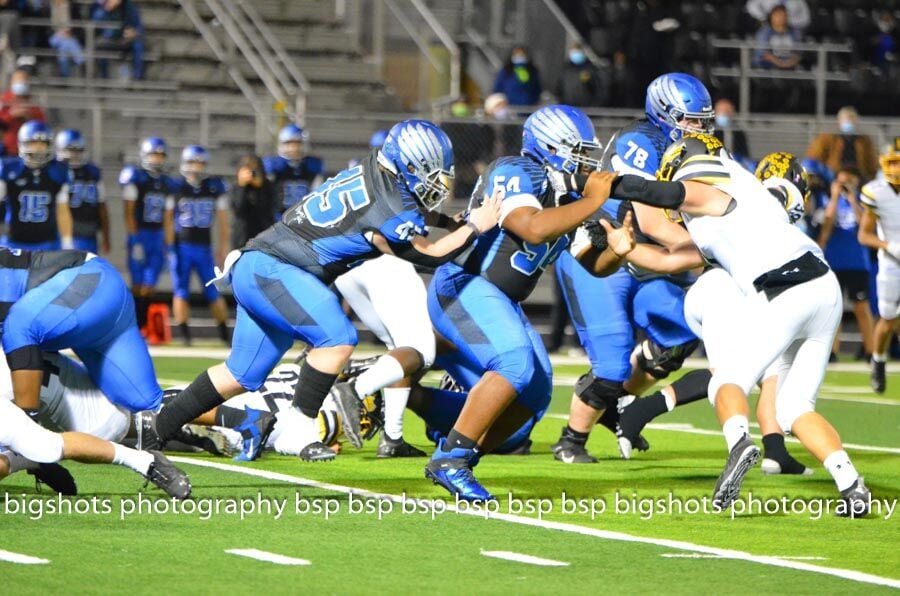 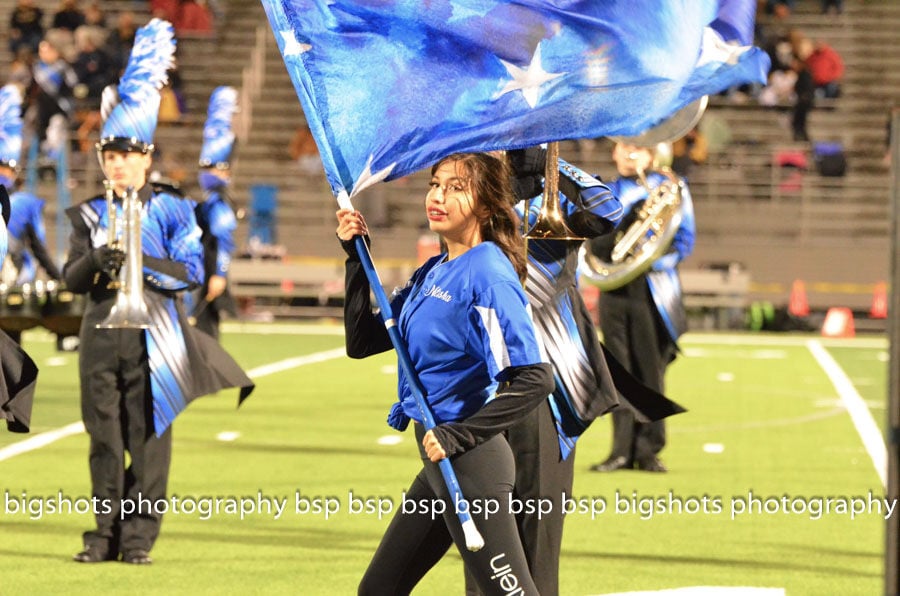 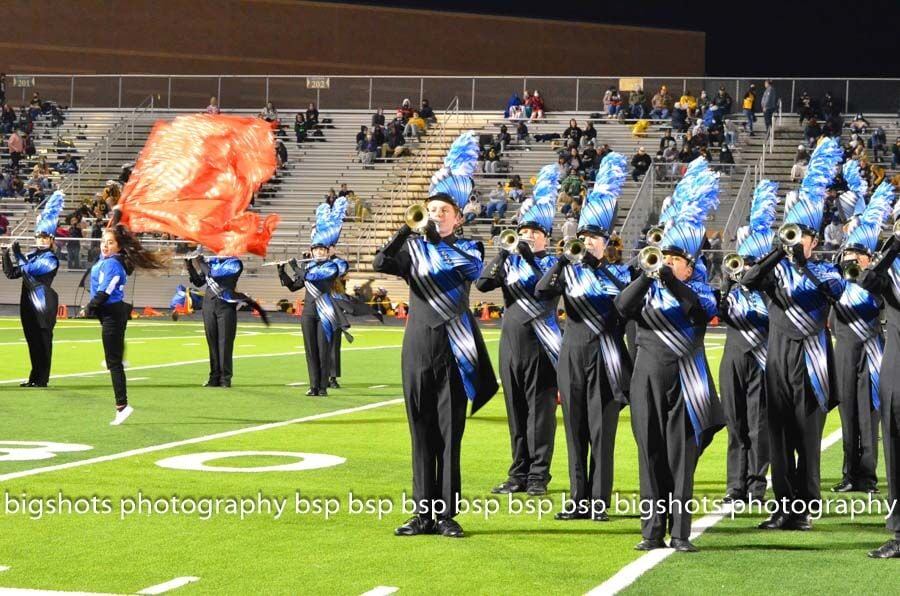 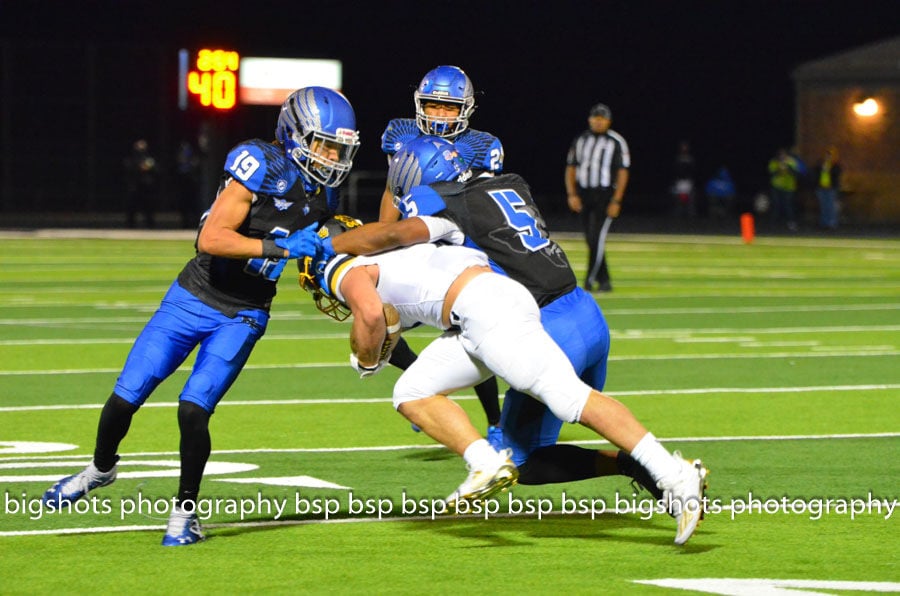 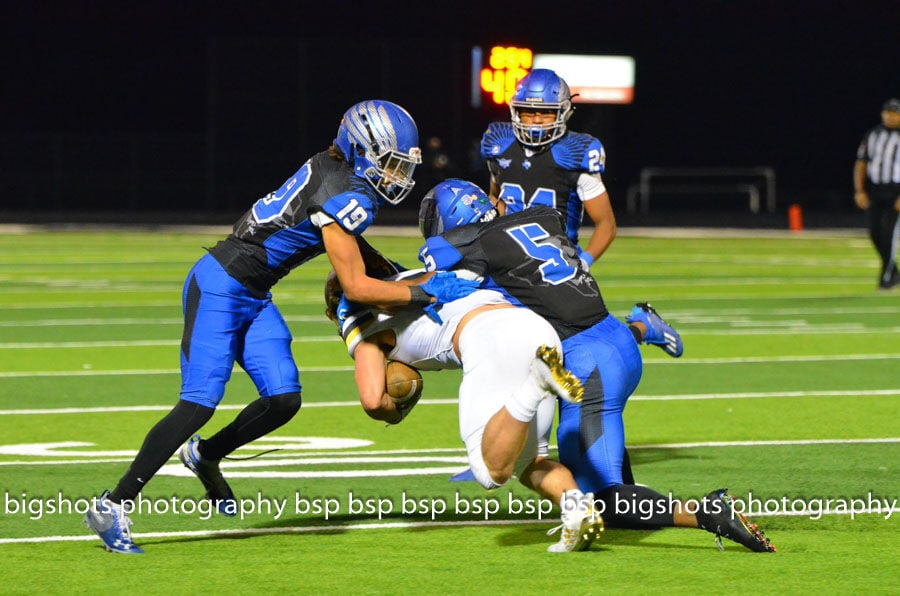 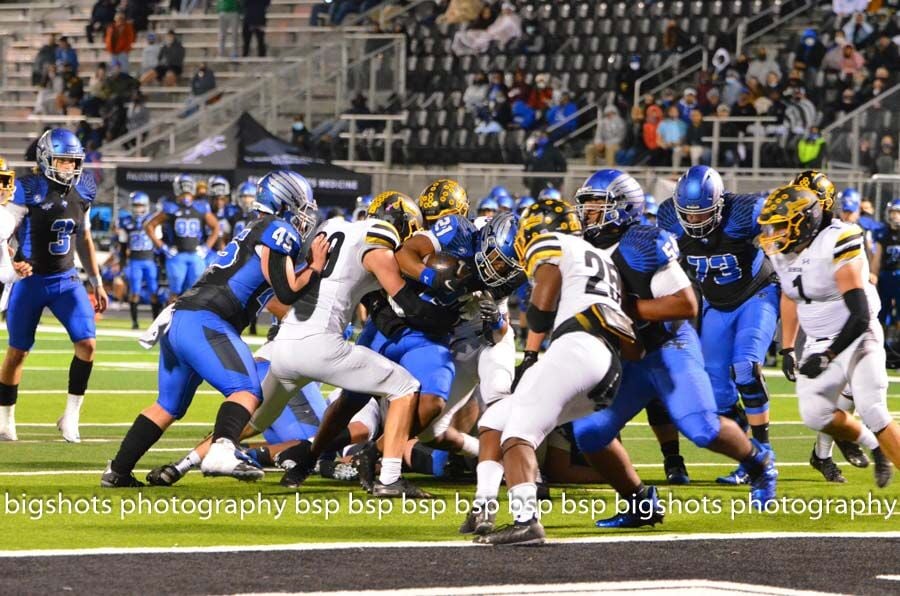 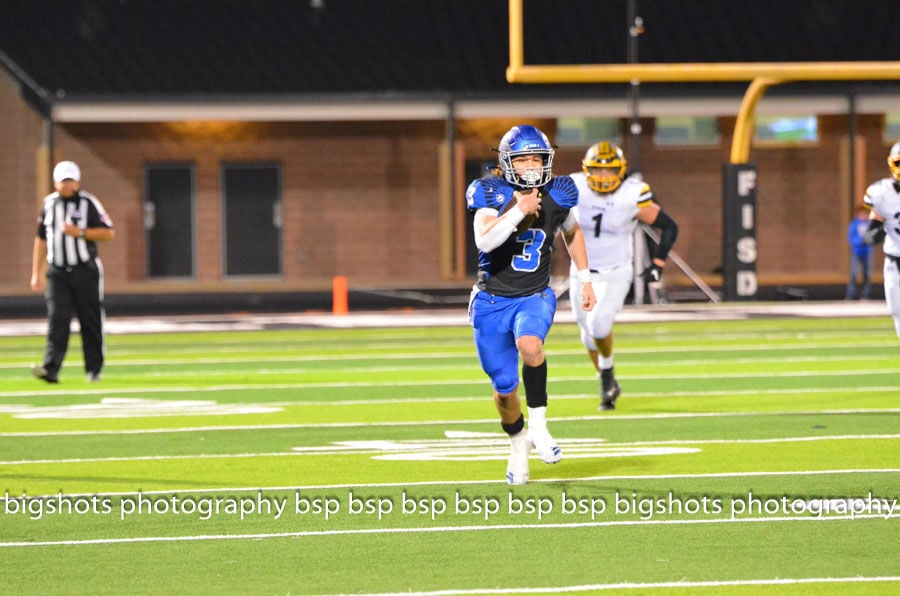 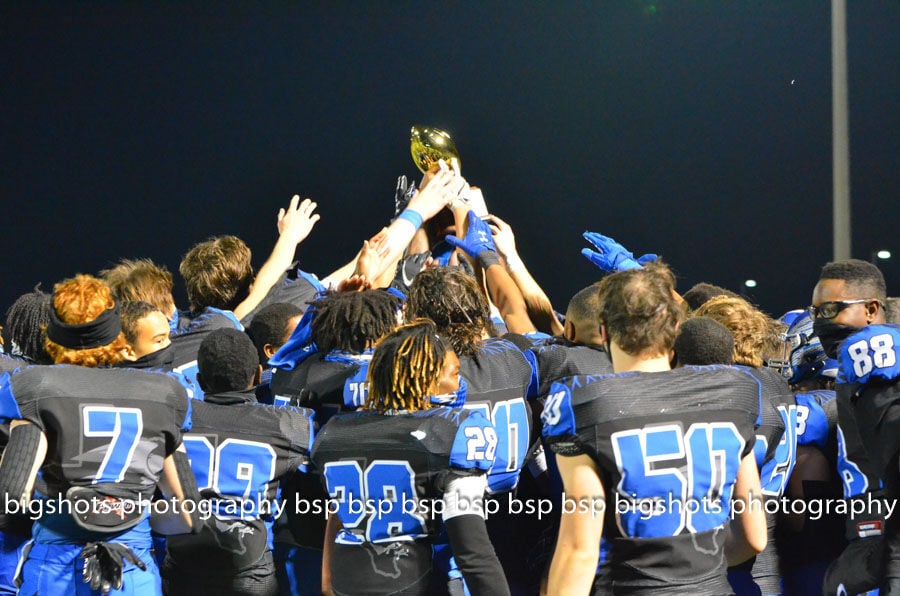 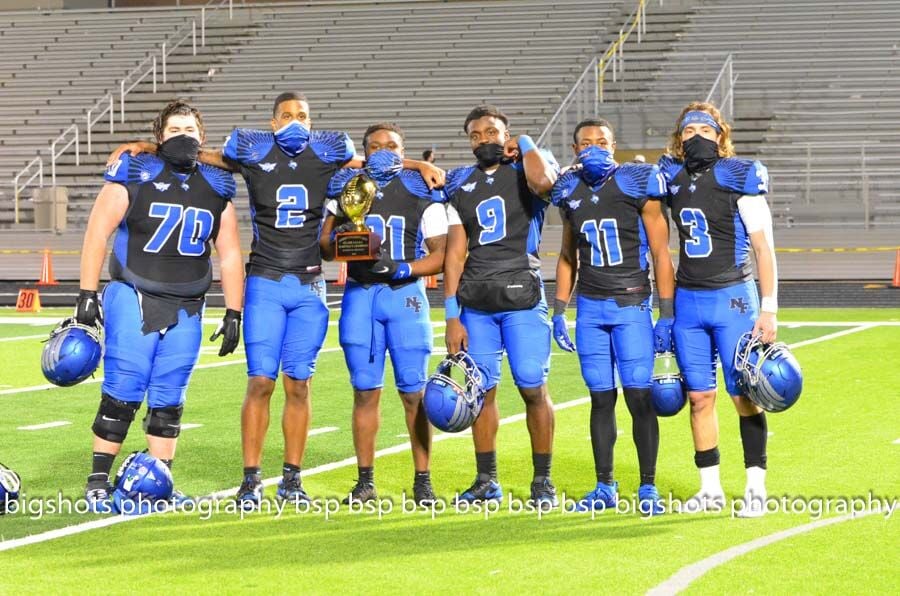 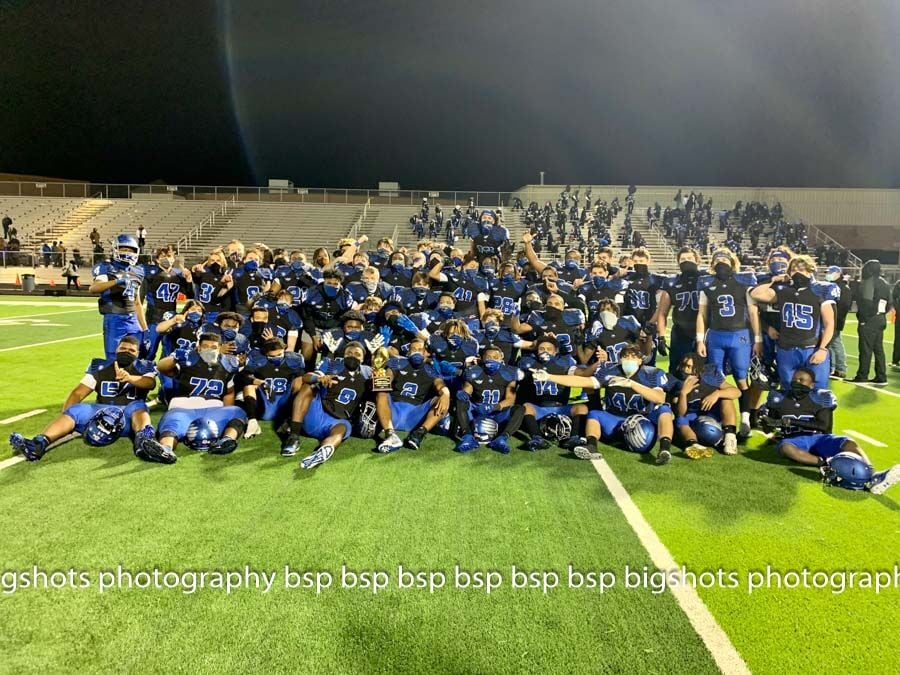 FORNEY, Texas — The North Forney Falcons hosted the Denison Yellowjackets on Friday night in their first playoff game since 2017.

The Falcons didn’t have much to write home about offensively in the first half except for a 14-yard touchdown pass halfway through the second quarter from senior quarterback Jacob Acuna to senior wide receiver Collyn Shipley who made another spectacular catch look routine along the boundary of the endzone for a 7-3 lead that North Forney would carry into halftime.

In fact, the Falcons were unable to gain a first down until that touchdown drive in the second quarter thanks in part to a very tough Denison defense that sold out to stop the North Forney rushing attack.

The Falcons defense did their part in the first half forcing the Yellowjackets to settle for a field goal after allowing Denison to get to the North Forney 11-yard line after two big runs totaling 79 yards from Yellowjacket running backs Asa Osbourn and Jadarian Price.

At halftime both high powered offenses combined for a total of just 10 points.

In the second, half both offenses came to life.

It was a strong third quarter that ended up propelling the Falcons to victory. North Forney received the second half kickoff and wasted little time finding the endzone. On 3rd down and 6 from his own 29-yard line Acuna found senior wide receiver Kam Allen on a deep crossing route over the middle with a perfectly thrown ball and Allen took it the rest of the way for the 71-yard touchdown. Allen finished with 2 catches for 78 yards and 1 touchdown on the night. After a failed 2-point attempt the Falcons led 13-3.

Special teams, which was a big storyline heading into the game, made its appearance when a high punt snap would go over the head of the Denison senior punter Reece Stange. Stange tried knocking the ball out of the end zone for a safety but North Forney Junior Linebacker Tre Jones picked up the bouncing football in the Yellowjacket endzone for a Falcons touchdown instead. The ensuing extra point attempt was no good so North Forney led 19-3 early in the third quarter.

Just as the Falcons looked like they were starting to pull away the Yellowjackets would answer back.

Facing 2nd down and 15, Osbourn took the handoff and went untouched around the left edge and zoomed for a 57-yard touchdown and North Forney’s lead was cut down to 19-10 after the extra point. Osbourn would go on to finish the night with 183 yards rushing and 2 touchdowns on 24 carries.

After both defenses forced a turnover on downs the Falcons struck with a huge play through the air when Acuna found senior wide receiver Kristian Aricheta for a 49-yard throw and catch that sat North Forney up inside the Yellowjacket 5-yard line. Aricheta made a wonderful adjustment to come back and play the ball while the defender tried to find it in the air.

Two plays later Acuna kept the read option and ran into the endzone easily for the touchdown and the Falcons lead grew to 25-10 with 1:14 to play in the third quarter.

After the North Forney defense forced another turnover on downs from Denison, Acuna, while being hit as he threw the ball, found Shipley streaking down the middle of the field with a beautifully placed pass that hit him stride in route to a 51-yard gain that put the Falcons at the Yellowjacket 2-yard line. Shipley ended the night with 5 catches for 85 yards and 1 touchdown.

On the very next play, senior running back Ty Collins punched in the final Falcons score of the night giving North Forney a 32-10 lead with 11:30 to play in the game. Collins who came into the game averaging 6.6 yards per carry was held to a meager 2.7 yards per carry on 25 attempts.

Then Denison came roaring back.

On 3rd and 13 from their own 27-yard line the Yellowjackets kept their hopes alive when Heavner found junior wide receiver Keegan Pruitt on a 61 yard hook up that set Denison up at the Falcons 7-yard line. Two plays later Price ran the ball in for the 2-yard touchdown and the Falcons lead was 32-18 after a successful 2-point conversion.

Starting with good field position after a failed Denison on sides kick attempt went out of bounds North Forney faced a 4th down and 1 at the Yellowjackets 35-yard line. The handoff to Collins would go for a loss of 3 yards and the Falcons would turn the ball over on downs giving another shot in the arm to Denison.

On the following possession Heavner, facing a 4th down and 16 from his own 44-yard line, dropped back to pass. Having all day to throw the ball, he found senior wide receiver Keebler Wagoner down the middle of the field for a 45-yard gain.

A couple plays later Osbourn ran through a would-be Falcons tackler to score from 2 yards out on 4th down and 1 to make it a one score North Forney lead 32-25 with 5:01 left to play after the extra point.

Then things got even more interesting.

With the Falcons trying to ice the game away a mishandled snap led to a terrifying turnover deep in their own territory. Denison had the ball at the Falcons 14-yard line after the fumble recovery with only a few minutes left to play and a chance to at least tie the game.

After a couple of run plays, the Yellowjackets had the ball inside the Falcons 5-yard line facing a 4th down and 1. On the next play it was an unlikely defensive hero that stepped up to make the game clinching defensive stop. North Forney junior wide receiver/defensive back Lemarcus Kirk swallowed up Price in the backfield and forced the turnover on downs. Kirk was only in the game defensively because of an earlier ejection of Jeremy Bailey after an unsportsmanlike conduct penalty. Kirk had rarely played any defensive snaps this season seeing most of his time on the offensive side of the ball.

So, with just a couple of minutes left all the Falcons had to do was get a first down or two and win the game. Simple right?

Denison’s defense, already feisty against the North Forney running game all night, knew exactly what the Falcons would try and do.

On 3rd down, the Yellowjackets stopped North Forney well short of the line to gain for a first down and had forced the Falcons punt team onto the field before a late penalty flag flew out onto the field. After the play was over an unsportsmanlike conduct penalty was assessed to a Denison defender and North Forney was granted a new set of downs.

Now, with the Yellowjackets out of timeouts all the Falcons had to do was get one first down and they would advance to round 2 of the playoffs.

Acuna came through. He kept the ball on the read option and ran for the game sealing first down.

The Falcons first playoff game in 3 years did not lack for excitement and the Falcons did just enough in all three phases of the game to advance past a very good Denison team.

The Falcons will advance to take on the 9-time state champion Aledo Bearcats at Globe Life Field in Arlington this Friday at 3:15 p.m.