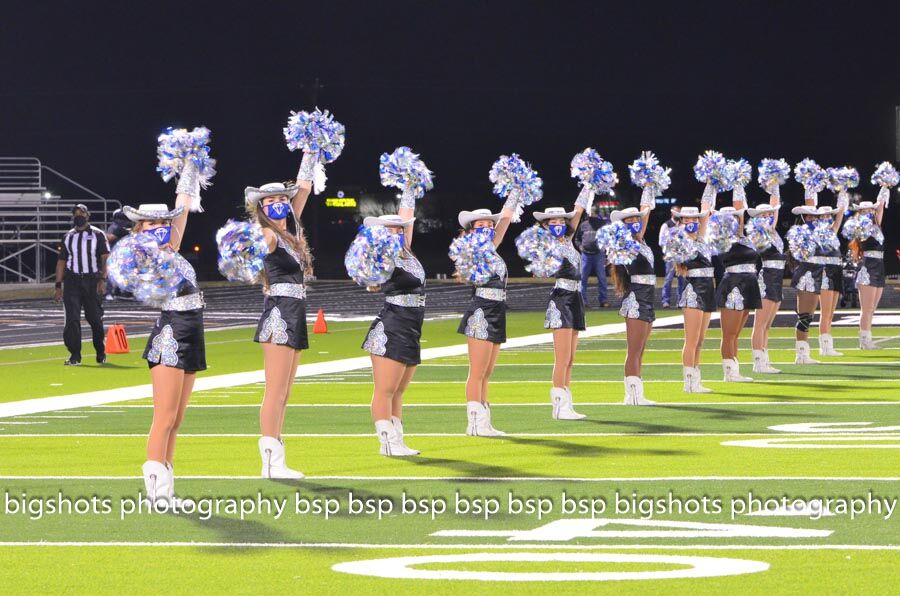 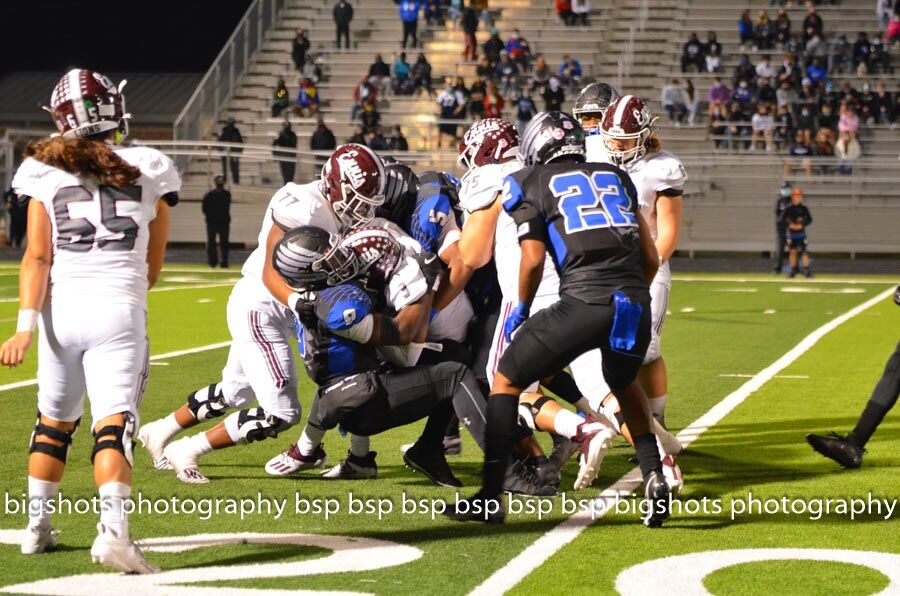 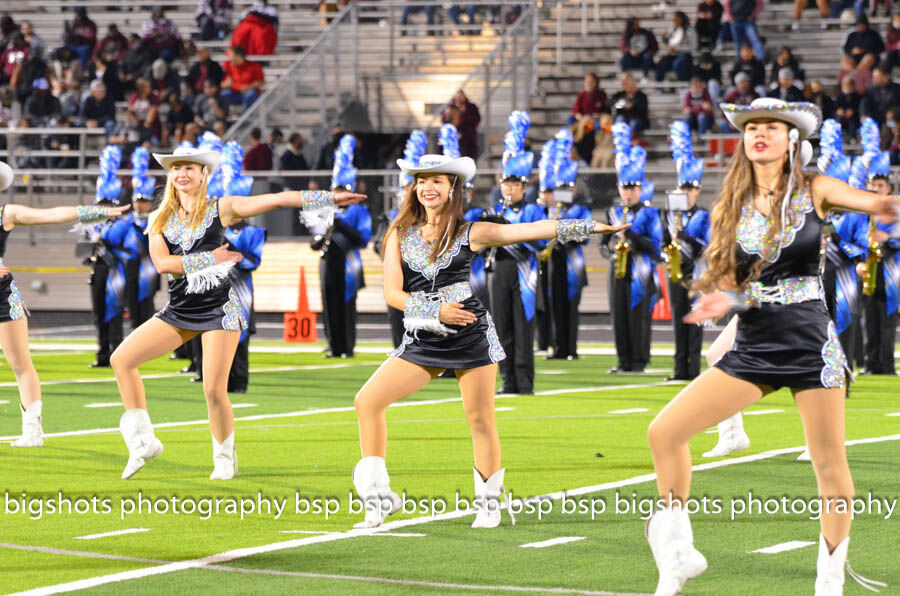 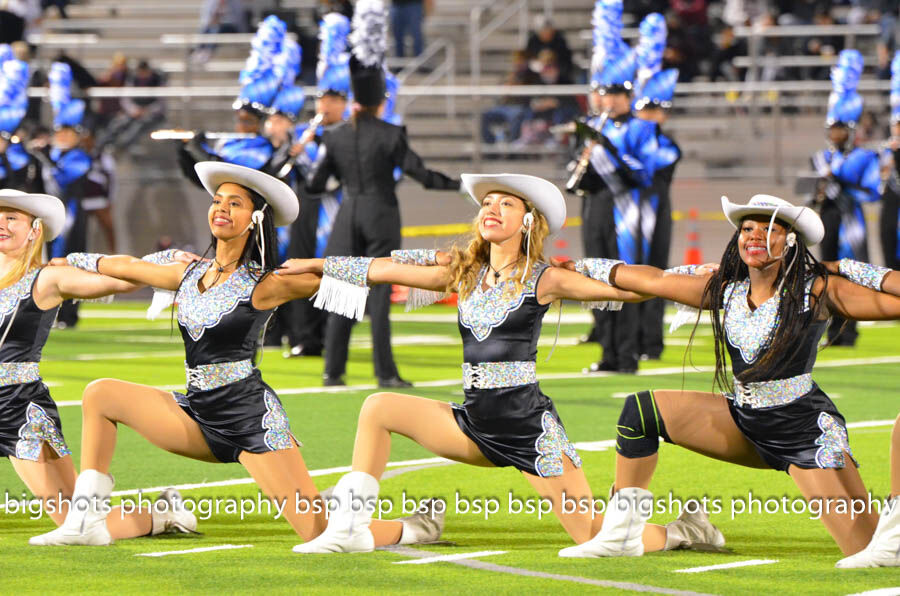 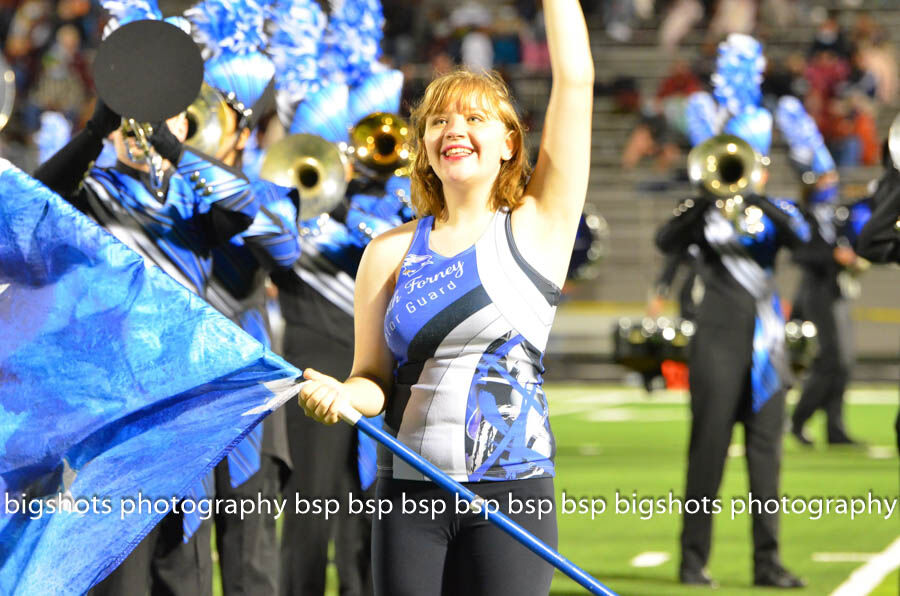 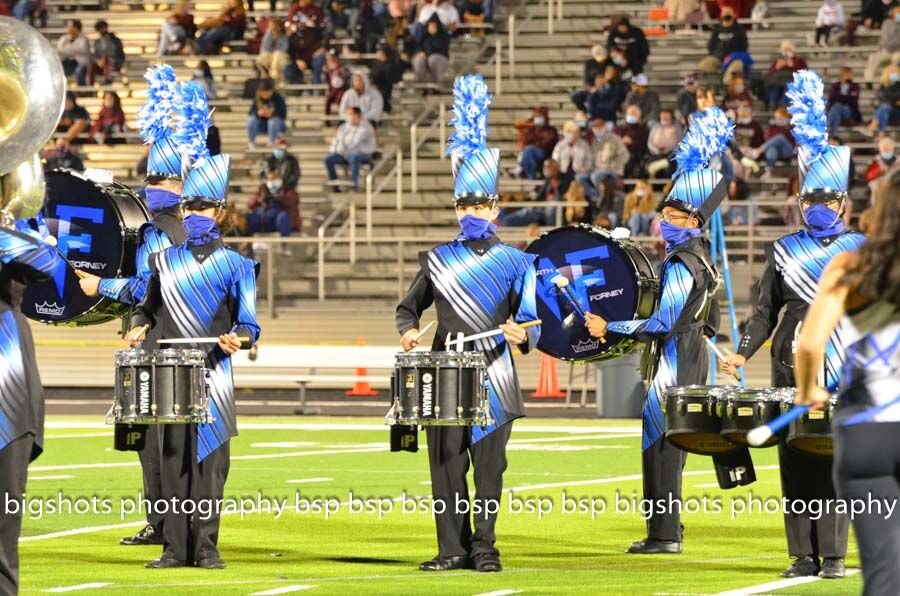 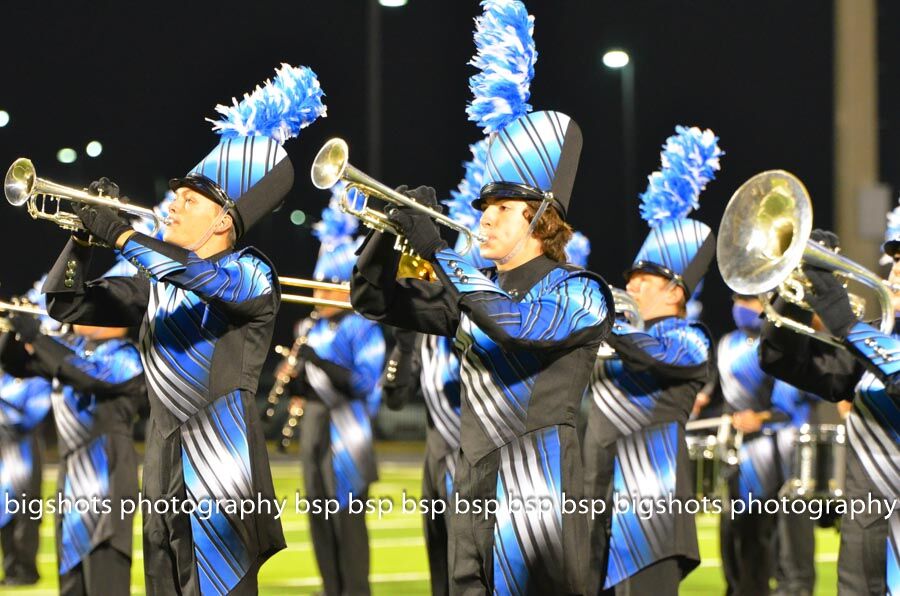 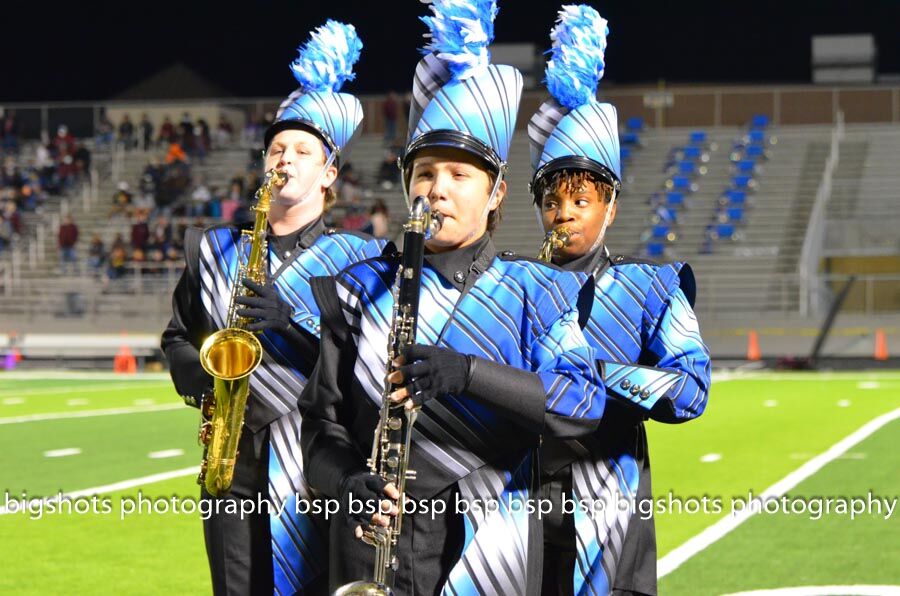 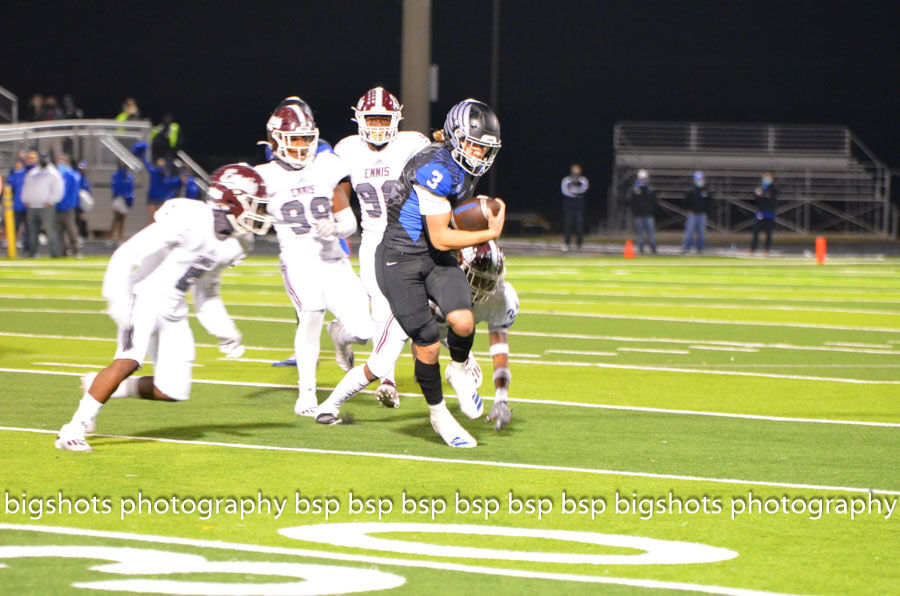 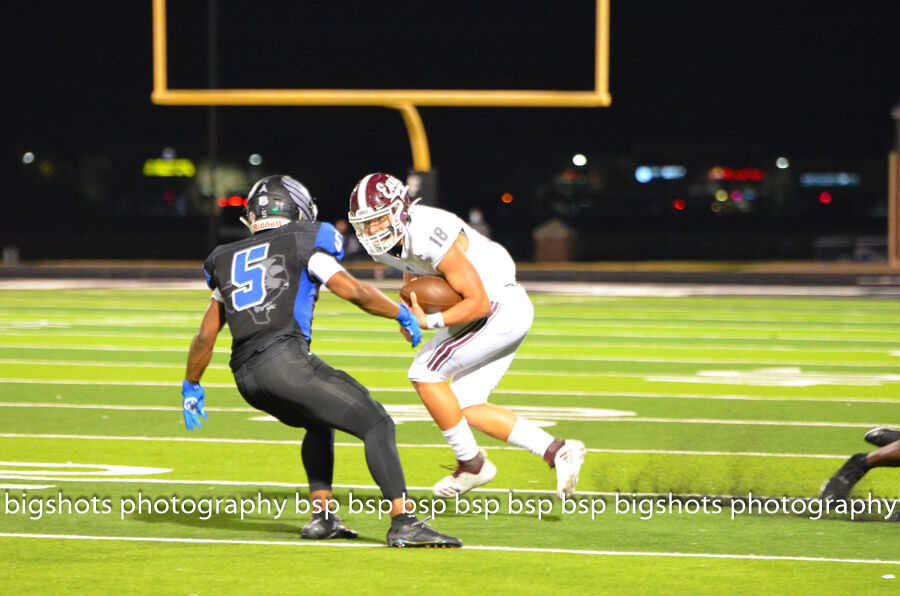 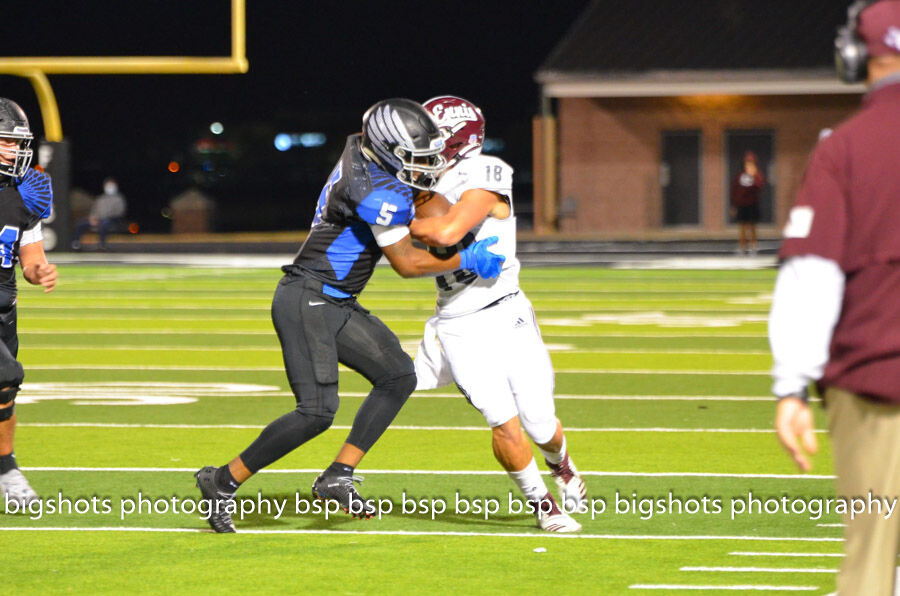 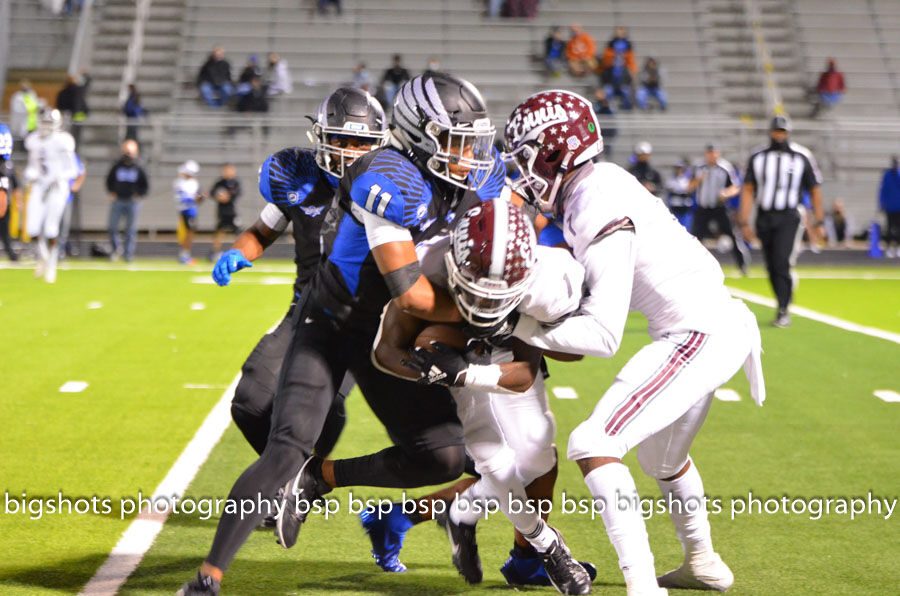 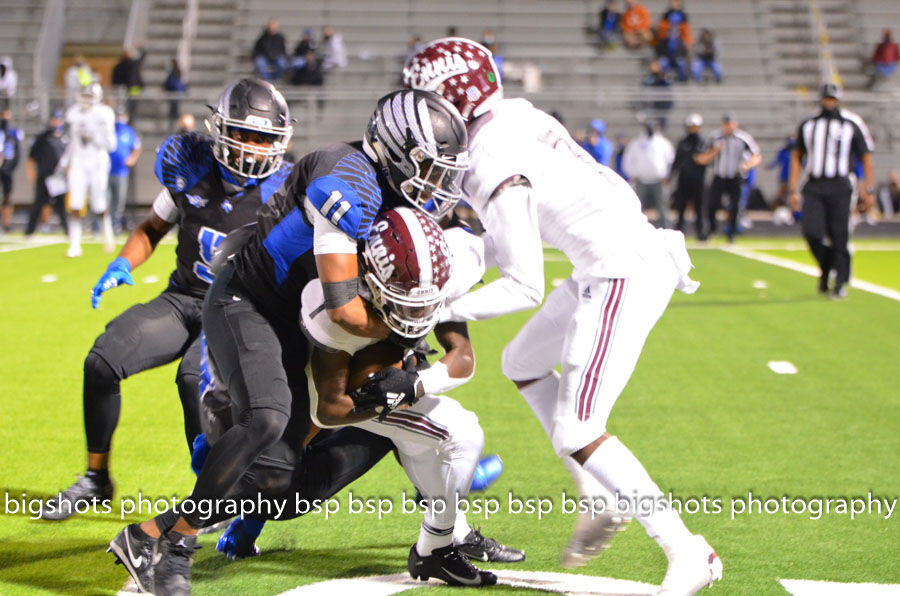 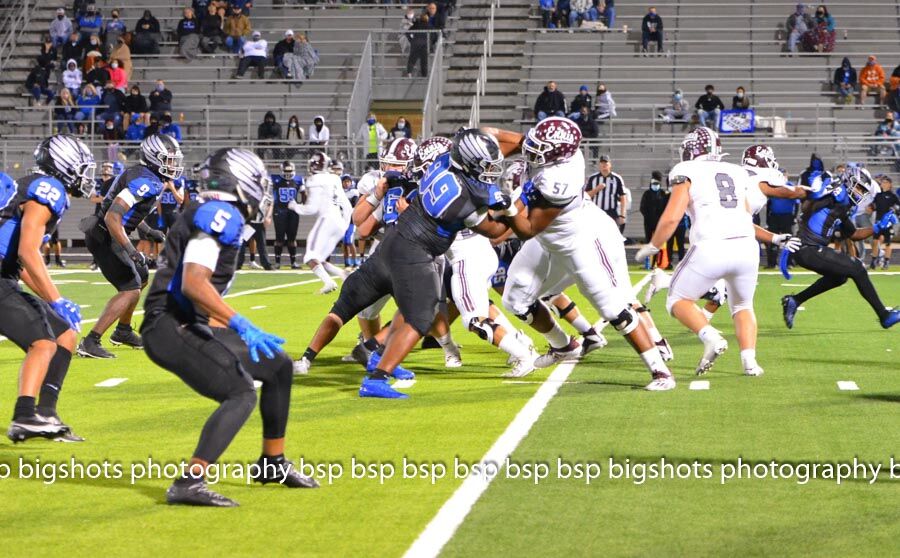 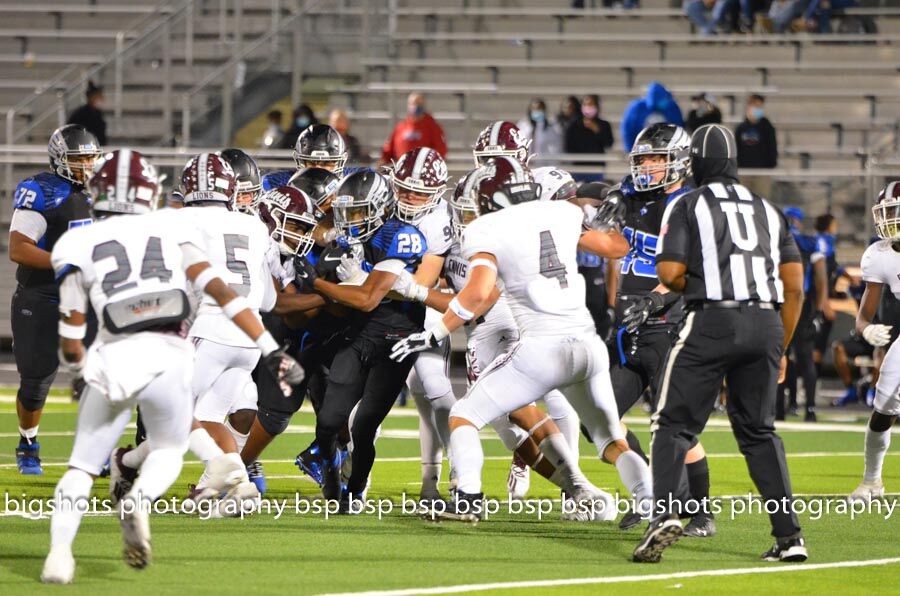 FORNEY, Texas — It was the moment everyone had been waiting for — two undefeated teams going head-to-head for a winner take all district championship game. Ennis had “been there, done that”, after there long postseason run last year but the Falcons were in uncharted territory regarding high-pressure games.

The game played out exactly in those ways. Ennis, although tested in this game in ways they haven’t been all year, were poised and in control even in the times when North Forney took momentum. North Forney committed two costly turnovers that ultimately netted the Lions at least 12 points and had other missed opportunities causing them to miss out on more points themselves.

Ennis won the toss, elected to receive, and wasted no time showing why they are the top ranked team in the state. Going 70 yards in just 4 plays capped off by a 22-yard touchdown run by junior running back De’ivian Johnson.

North Forney answered right back with an impressive opening drive of their own tying the game 7-7 thanks to a keeper up the middle on 4th and goal from the 5-yard line by senior quarterback Jacob Acuna.

Ennis made quick work of their next possession as well when senior quarterback Collin Drake finished another quick, five-play, 72-yard drive with a 17-yard touchdown run of his own to put Ennis up 14-7.

The Falcons special teams unit had the first gaffe of the night and it turned out to be quite costly. Punting from his own endzone, senior wide receiver turned punter Collyn Shipley was unable to cleanly field a low snap and after eventually scooping it up and trying to scramble out of trouble he was tackled and fumbled the ball in the end zone. It was recovered by the Lions for a 6-point touchdown instead of the Falcons for a 2-point safety.

At that point Ennis led 21-7 and it seemed as though this was just going to be another 2020 Ennis blowout that would have their starters watching from the sideline with a comfortable lead in the 4th quarter.

North Forney’s defense had other ideas.

For the next 24 mins of game time (late first quarter until late third quarter) the Falcons defense did not allow a touchdown, only giving up a third quarter field goal after the punt team gave the ball to the Lions offense at North Forney’s 18-yard line. Ennis went into Thursday night’s matchup having only punted TWICE this entire season. The Falcons defense forced 4 Ennis punts in the second and third quarters.

However, in that same stretch the offense struggled to make up ground.

Miscues on two different North Forney offensive possessions came back to haunt the Falcons. Early in the second quarter, senior wide receiver Kristian Aricheta caught a screen pass and was on his way to possibly an 81-yard touchdown run when his teammate junior wide receiver Lemarcus Kirk inadvertently and accidentally nudged him out of bounds near the Lions 36-yard line while looking to setup a block along the sideline. The Falcons offense stalled out 3 plays later and were forced to punt.

Later in the second quarter the Falcons had the ball 1st-and-goal from the Ennis 9-yard line before miscommunication between Acuna and junior wide receiver Tyler Tucker led to an interception in the end zone that once again kept North Forney from cutting into the 21-7 Ennis lead.

The Falcons’ offensive misfortunes continued late in the third quarter when they had the ball at the Ennis 15-yard line facing a 2nd down and 3 but they were stopped on three straight plays and turned the ball over on downs.

With Ennis leading 24-7 thanks to the aforementioned field goal, the North Forney offense finally broke through to close the Ennis lead down to 24-14 with 3:13 to play in the third quarter thanks to another Acuna touchdown run, this time from 3 yards out.

Ennis found their running game in the fourth quarter behind Drake, who ended the game with 99 yards rushing and 1 touchdown on 18 carries, and Johnson, who had 134 yards rushing and 2 touchdowns on 15 carries. Ennis scored a touchdown late in the third quarter and once again late in the fourth via a 41-yard touchdown pass from Drake to senior wide receiver Karon Smith and a 38-yard touchdown run from Johnson. Those scores would make the final 38-14 Ennis.

The Falcons were by far the stiffest competition Ennis has faced all season as evidenced by the fact that Ennis only led by 10 points with over two minutes remaining in the third quarter.

They also made presumptive offensive district MVP Collin Drake have by far his worst passing performance of the season — throwing for just 80 yards and only completing 5 of his 15 attempts. Drake had averaged 231 yards passing per game and completed over 70% of his passes before Thursday night.

With the loss, North Forney will move to 7-1 on the season and finish second place in the district behind Ennis. There’s a lot of positives that North Forney should take away from this and, chief among them, is the fact that they can hang with the best teams in the state.

Next week is the scheduled district bye week. The Falcons will play the Royse City Bulldogs the following week for a “playoff tune-up game” that will have no baring on the district standings.