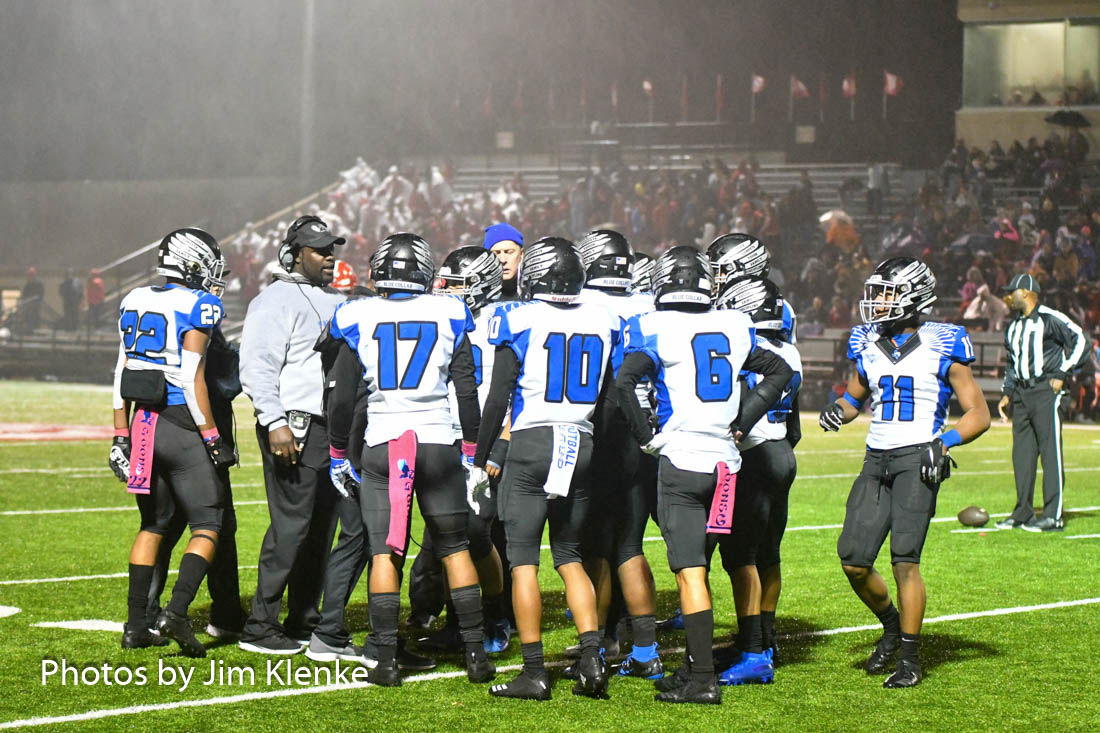 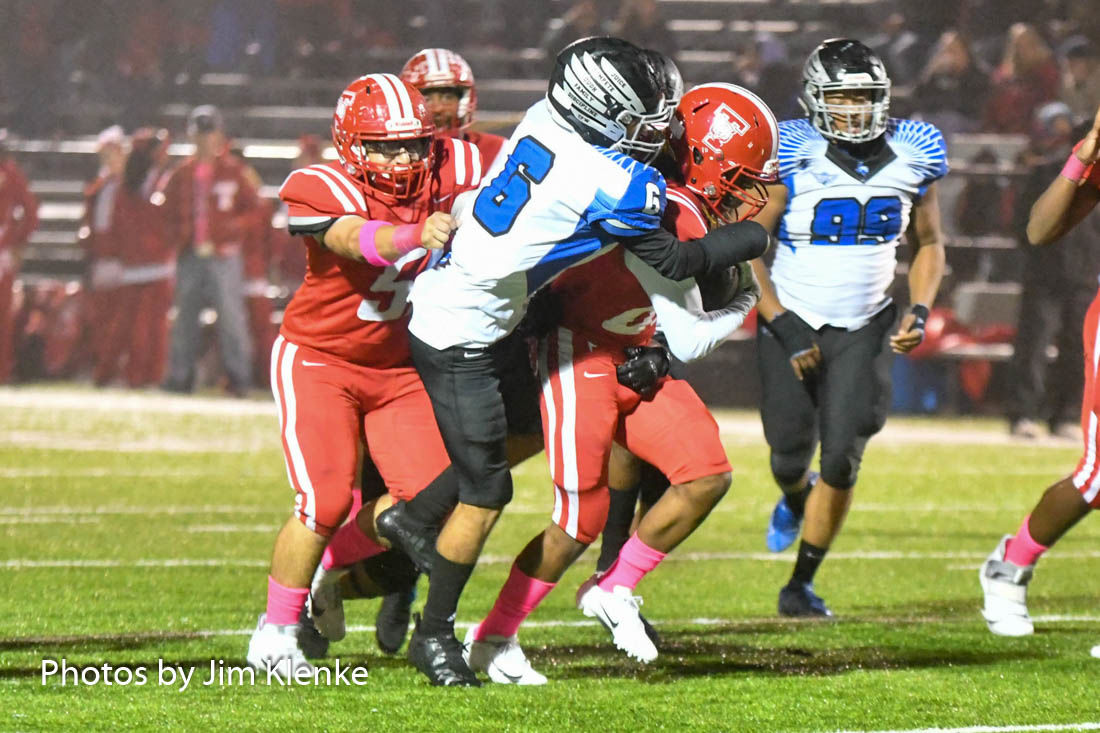 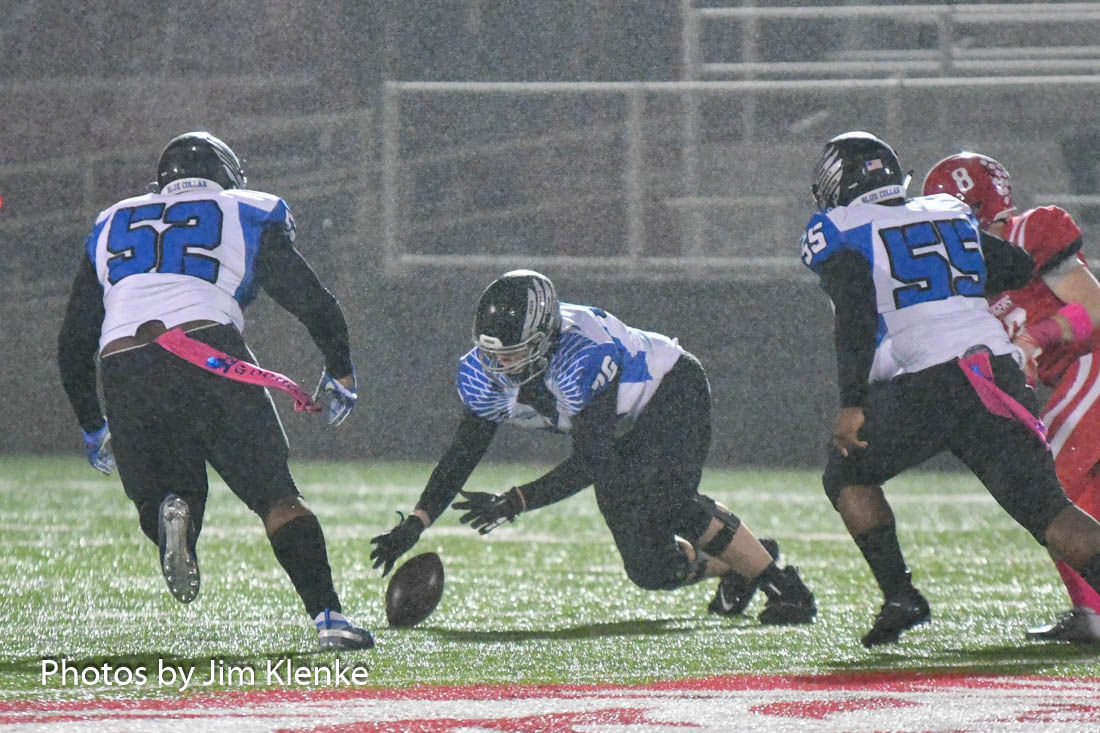 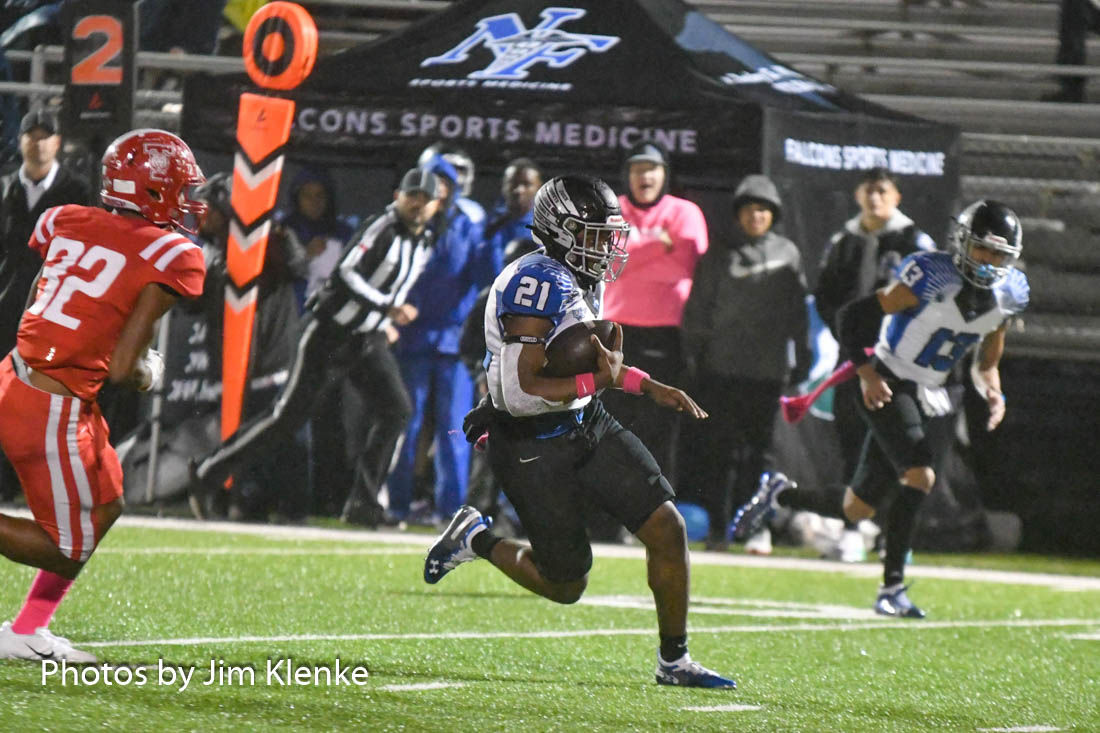 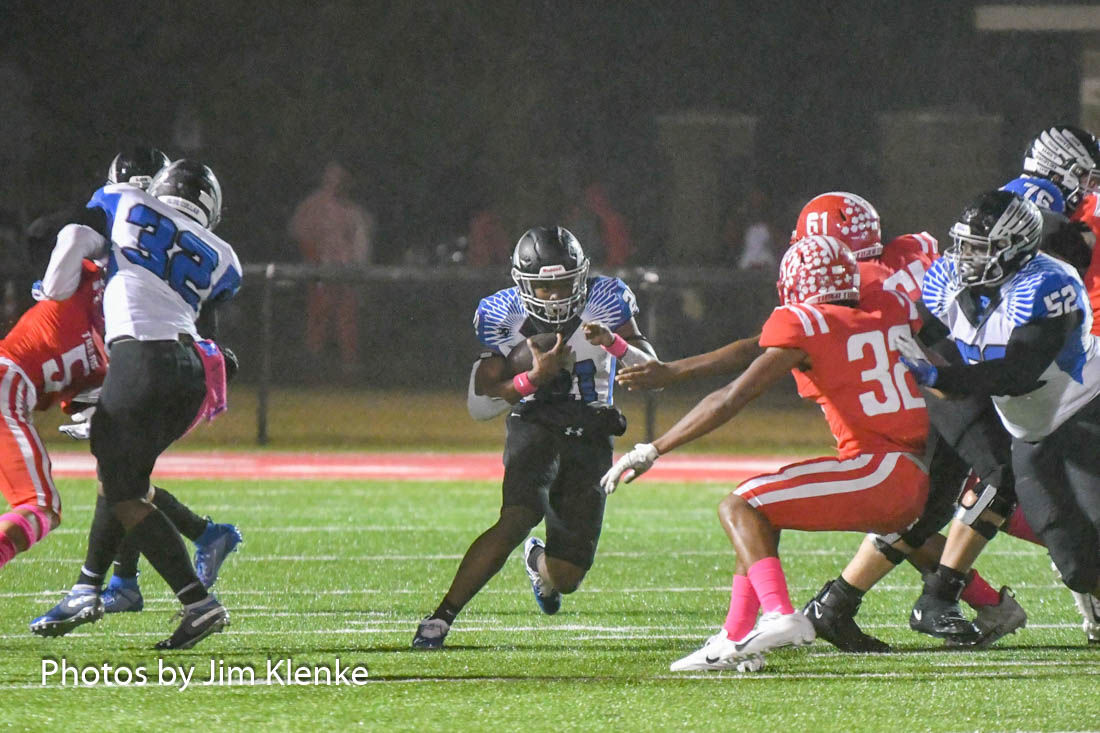 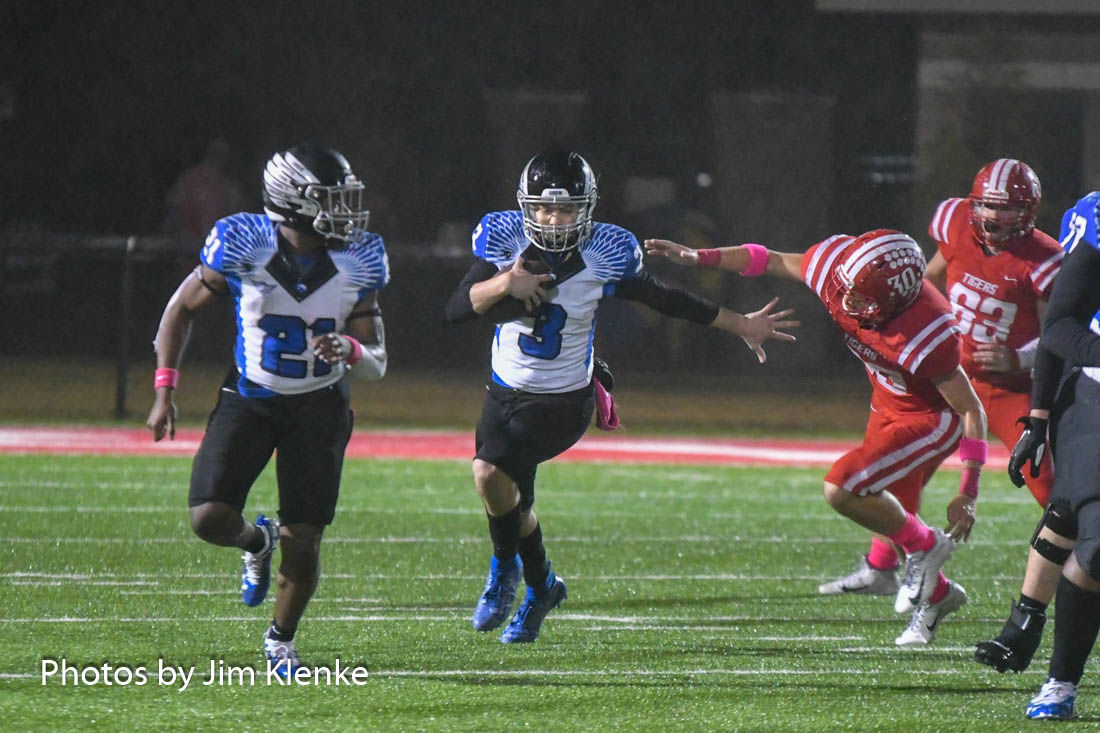 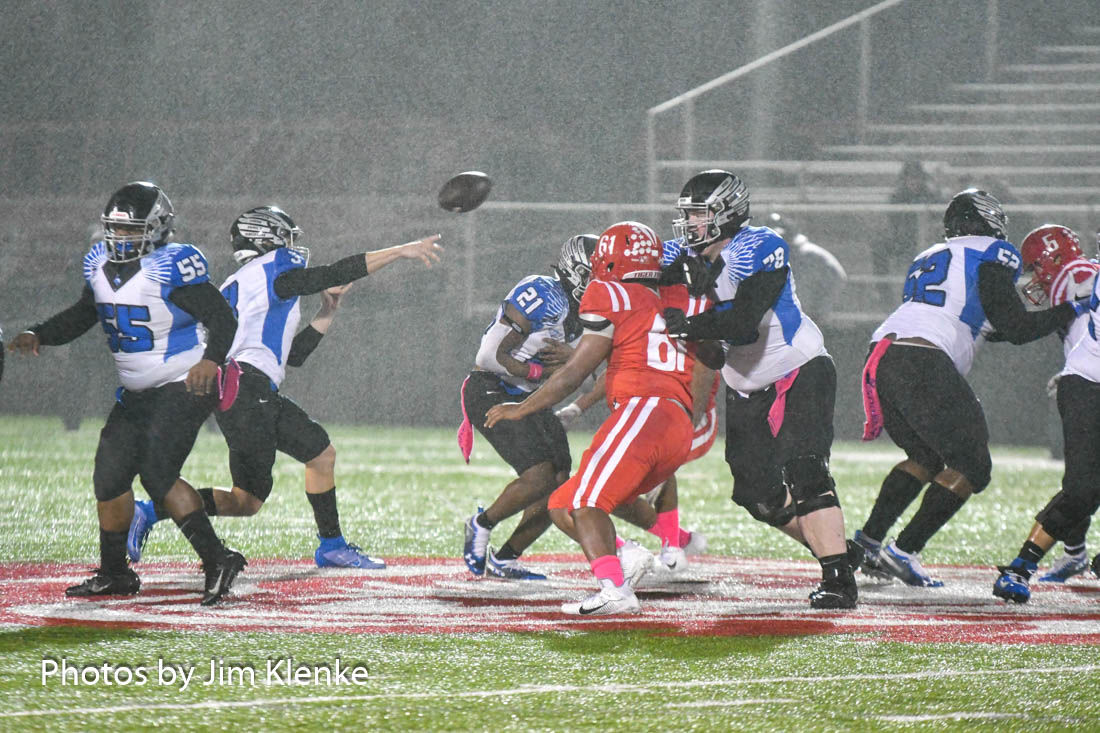 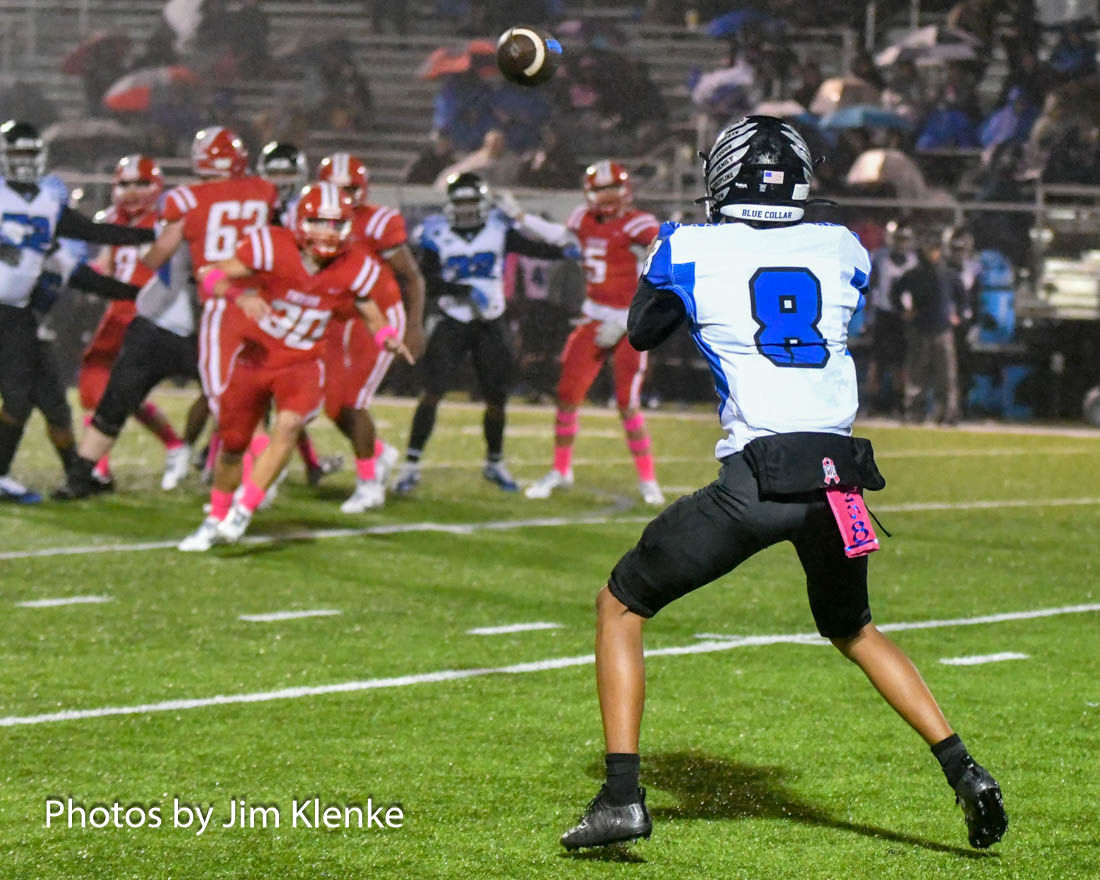 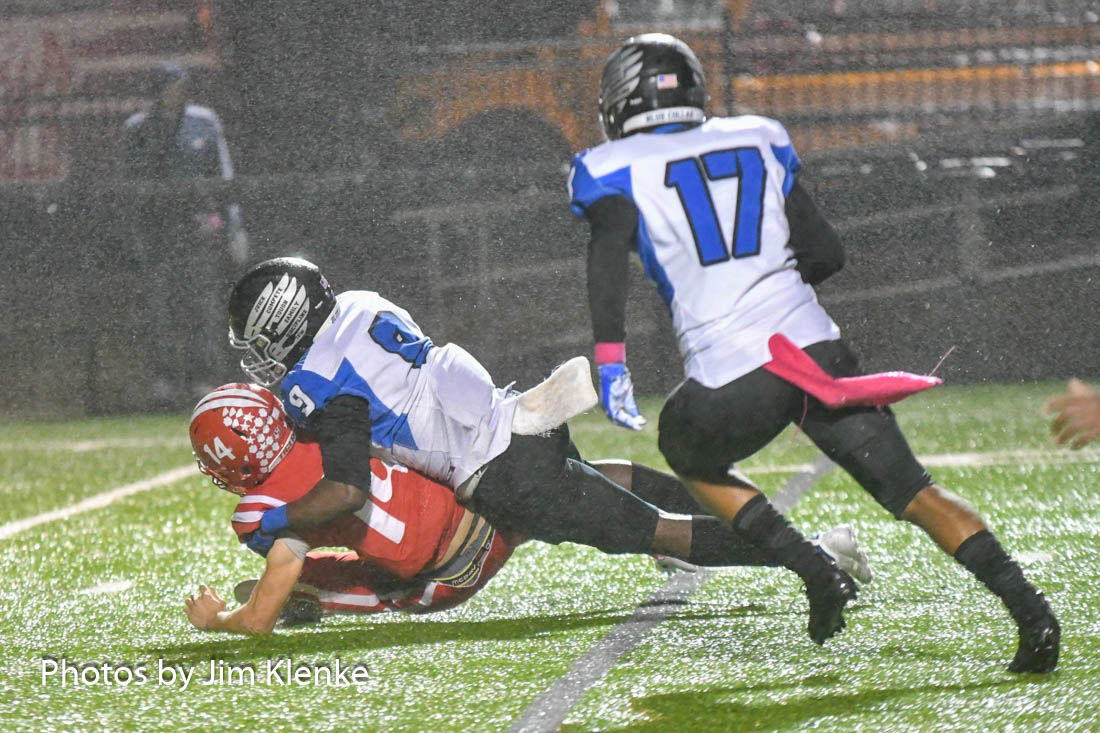 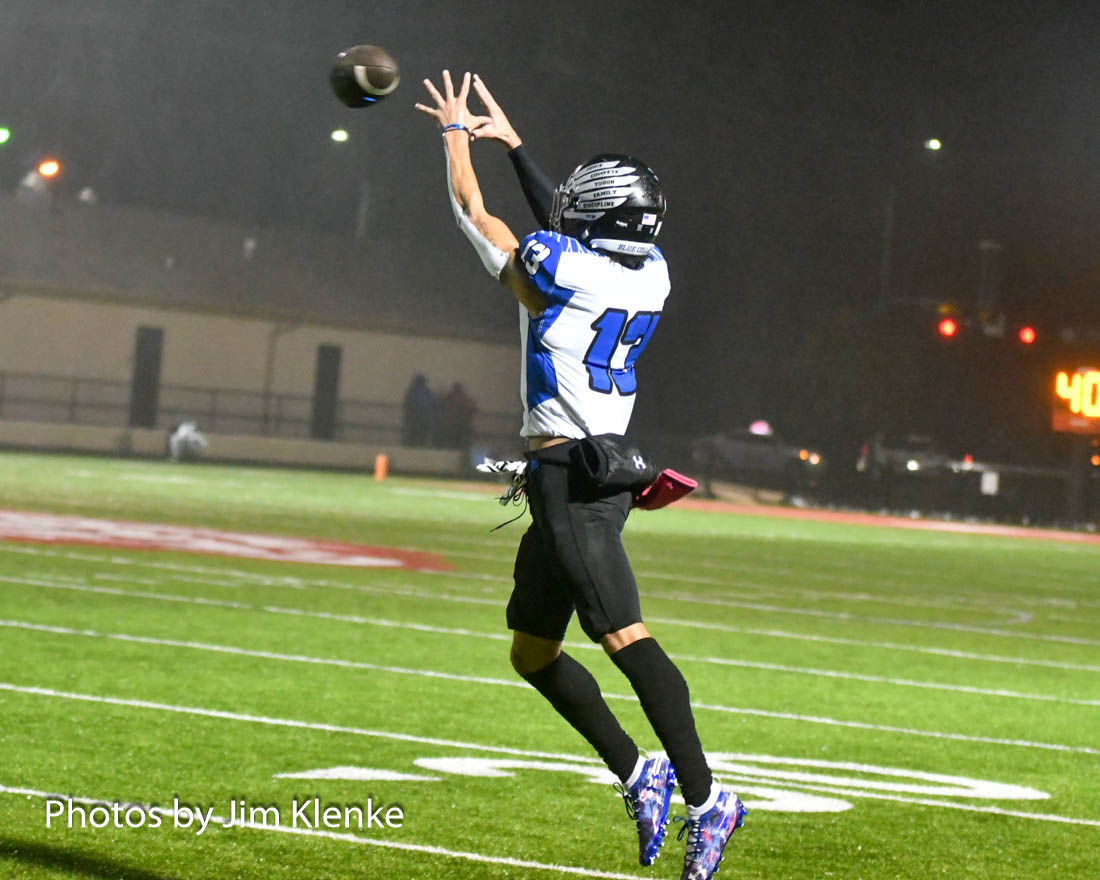 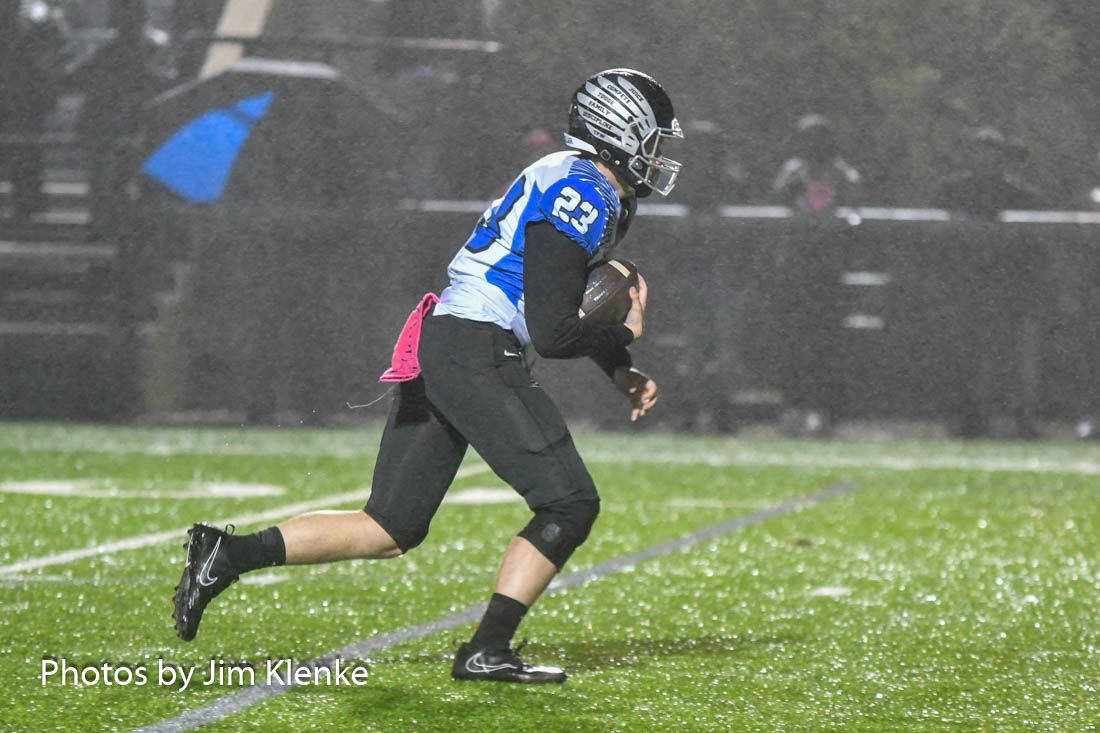 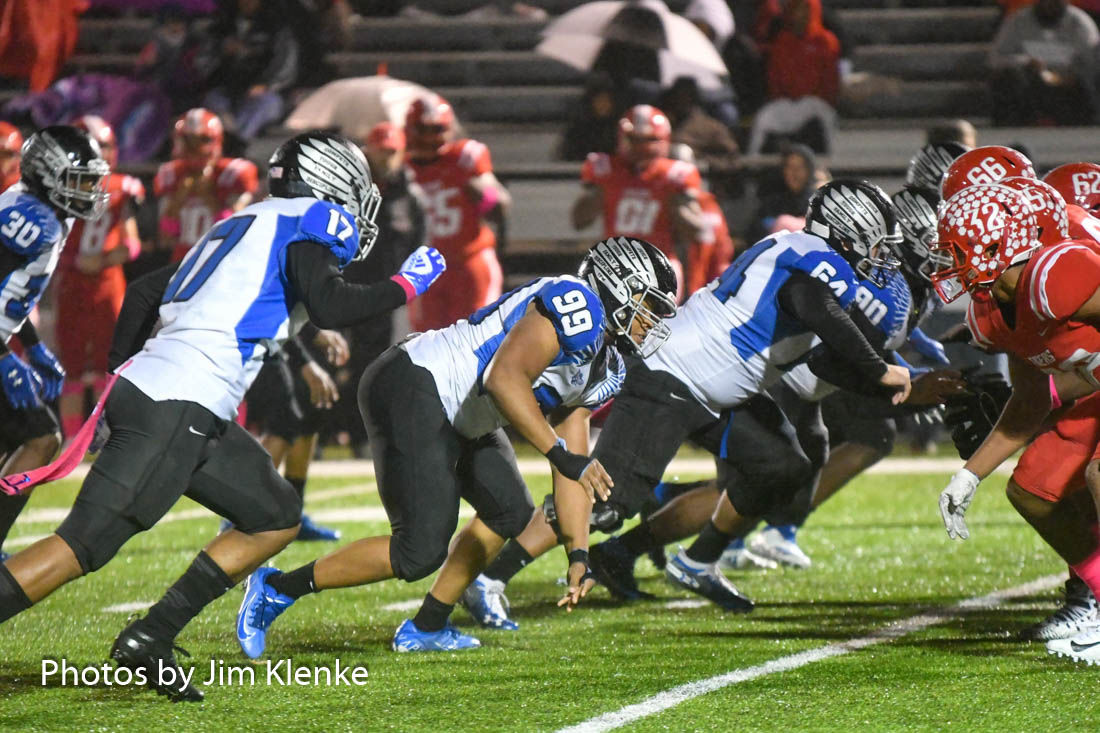 FORNEY, Texas — The Falcons and Tigers had to contend with cold, wet weather on Friday night.

It would play a huge factor in the game as there were FIVE fumbles in the 1st quarter alone. It would also contribute to a plethora of dropped passes and a number of mishandled snaps. North Forney was able to ride on the back of running back Ty Collins to the tune of 231 yards on 42 carries and opportunistic defense in route to a 50-28 victory at Terrell Memorial Stadium.

The wet conditions would waste no time making its presence known. On the opening kickoff, North Forney would recover a Terrell fumble at the 27-yard line. On the ensuing play Falcons Quarterback Jacob Acuna would first throw a backwards pass to wide receiver Collyn Shipley who would then throw the ball to wide receiver Nick Booe for a 27-yard touchdown. After exactly one play from scrimmage, North Forney led 7-0.

After a 25-yard touchdown run from Terrell running back DeDe George and a failed extra point attempt, the Tigers would recover an onside kick against the Falcons. But with Terrel driving and looking to take the early lead, the fumble bug would strike the Tigers again. On 4th and 4 at the Falcon 38-yard line, Terrell would run the ball for what would’ve been more than enough for the first down. However, awaiting the Tigers ball carrier at the end of the run was the hard-hitting Falcons Safety Jewelz Demps, who was able to dislodge the ball onto the turf where an alert DeMarcus Kirk would pounce on it.

The Falcons would follow that up with a 9-play, 71-yard drive capped off by a 1-yard touchdown run from Ty Collins. Collins also had a 26-yard run earlier in the drive to setup his 1-yard score. The Falcons would lead 14-6.

The next Terrell drive would be a brisk 3-and-out thanks in part to defensive linemen Josh Anderson and Akanimo “Nemo” Asuquo. Nemo would be an absolute handful for the Tigers offense all night long.

The Falcons offense would have to punt near midfield after a fumble from Acuna came when the ball slipped out of his hand while he was attempting to pass. Not to worry though as the Tigers offense would go 3 and out again after back to back negative plays caused by Nemo. One of those would be an 8-yard sack that would cause Terrell to have to punt out of their own endzone.

The Falcons would start their next possession with excellent field position at the Terrell 42-yard line. They would then put together a 10-play drive that would result in a 6-yard touchdown pass from Acuna to wide receiver Kam Allen in the back of the endzone. They would also convert a fake field goal for the 2-point conversion and go ahead 22-6.

A couple of possessions later with just a minute and change left before halftime the Falcons would execute a beautifully drawn up play in which Ty Collins would go in motion from in the back field to the near sideline, but Acuna would fake the pass that way and go back to the far sideline where the offensive line was setting up the “jailbreak” screen for Nick Booe. Booe with a wall of blockers in front of him would have to do little on his own except use his speed to blaze past defenders for the touchdown. The Falcons would lead 29-6.

Terrell would keep themselves in the game with a 45-yard reverse to wide receiver Ethan Lunsford for a touchdown with 34 seconds left before halftime. They would also convert the 2-point conversion in the back of the endzone when the pass bounced off of one Tigers receiver and into another one’s hands.

At halftime the Falcons would lead 29-14.

After an exchange of punts to start the 2nd half left the Tigers starting from their own 7 yard line, North Forney’s DeMarcus Kirk would again make his presence known with a “Strip and Score”. Kirk would literally just take the ball away from the hands of the Terrell running back and run it in for the touchdown himself. The Falcons would push their lead up to 36-14.

The Tigers would answer back a few plays later when George would find a crease in the middle of the Falcons defense and dart 45 yards for the touchdown. The Falcons lead would be cut to 36-21.

After punts from both teams left North Forney starting their drive at the Tigers 33-yard line, they would only need 6 plays to score a touchdown thanks to a 6-yard run from Jacob Acuna on the read option. With the 3rd quarter almost over the Falcons would again push their lead out by 3 scores, 43-21.

On the next drive, with Terrell needing to keep pace with North Forney, Falcons defensive lineman Roderick Brown would could come up with a huge chase down sack to force a Tigers punt and all but close the door on any chance of victory for Terrell.

The Tigers wouldn’t be done quite yet though. With just over 6 minutes left in the game, George would find his way through a crowded backfield and emerge through for a 58-yard touchdown run to cut the Falcons lead to 43-28. DeDe George would finish the night with 239 yards and 3 touchdowns on just 25 carries.

The Falcons would get the last score of the night after they were setup via an interception by Brown after a tipped pass by fellow defensive lineman Patrick Lacy. Brown would return the pick to the Tigers 17-yard line. Then, from the 10-yard line, Ty Collins would break 4 tackles and get help from the offensive line to push the pile the rest of the way in for his 2nd touchdown and the final score of the game.

The night wasn’t pretty in many ways, but the end result was. The Falcons won 50-28 to stay in playoff contention on a night where they received no help from other teams in the district regarding their playoff chances.

North Forney will need another win next week as they return home to take on the Royse City Bulldogs at City Bank Stadium. Kickoff will be at 7:30 pm and the radio broadcast will begin at 7:10 pm. You can subscribe to the broadcast channel here, https://www.youtube.com/playlist?list=PLwIggW7kdJXraVk7LAt7M452JjG_iL9RO.